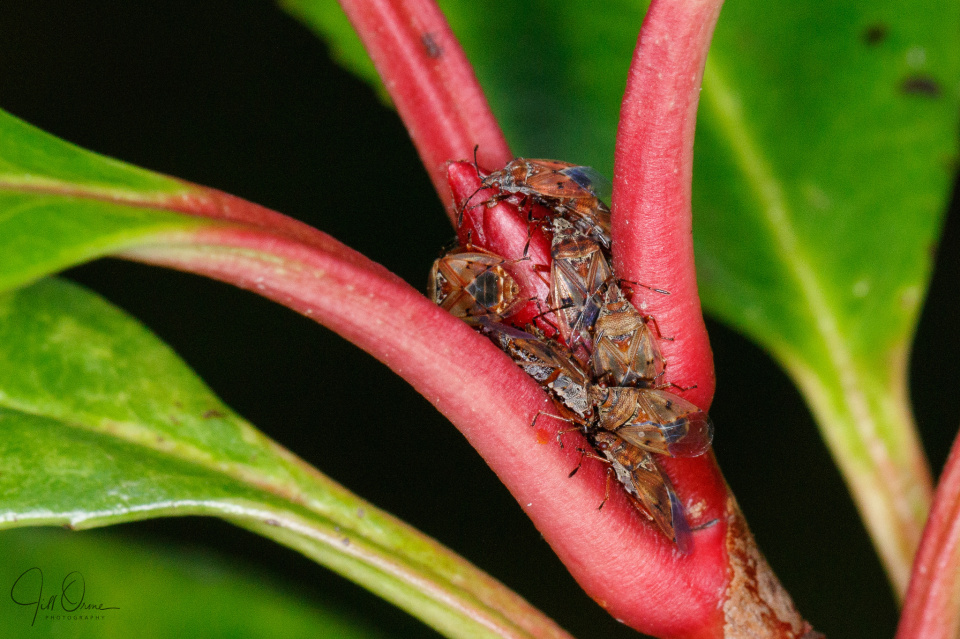 With every passing day it’s becoming harder to find invertebrates to photograph – although there’s a rumour that it may warm up again (briefly) next week, which should bring a few of them back out of their shelters. I do have two fairy reliable subjects though: the 7-spot ladybirds that are still munching their way, stickily, through the aphids on the yarrow, and the birch catkin bugs on the photinia.

For something that’s only about half a centimetre long, the birch catkin bug is a distinctive little creature, and I think a handsome one too. I’ve been photographing individual nymphs and adults wandering around on the leaves of the photinia for several weeks now, but since the temperature has begun to drop the bugs have started to congregate around the leaf buds, and tuck themselves into the tightest possible corners. Today there were at least thirty adults and a couple of late instar nymphs on the shrub, gathered in huddles around a few favoured buds, which is the highest number I’ve ever seen.

Invertebrates have a wide range of strategies for survival through the winter. In many cases it’s one of the immature stages – egg, larva or pupa – that takes the species through from one year to the next, the adults having died at the end of their breeding season. In others though – notably beetles and bugs – it’s the adults that overwinter. They tend to look for dry and sheltered places where they will be protected from the weather; stop feeding and empty their gut; and change their body chemistry in various ways, such as replacing water with a substance (commonly glycerol) that freezes at a lower temperature, and producing proteins that inhibit the formation of ice crystals. They then go into semi-dormant state called diapause – the insect equivalent of a warm-blooded animal’s hibernation – and wait out the cold and dark months.

I find it hard to believe that these tiny bugs are planning to overwinter here –  there isn’t very much protection for them, should the weather turn really bad – and I’m wondering if this group hugging is just a way of sharing their body heat, to allow them to stay awake and active a little while longer. But I haven’t been able to find very much information on this species, and nothing at all on its winter survival strategy beyond the bald statement that “adults overwinter”. So I guess I’m just going to have to keep watching them, and wait to see what happens.