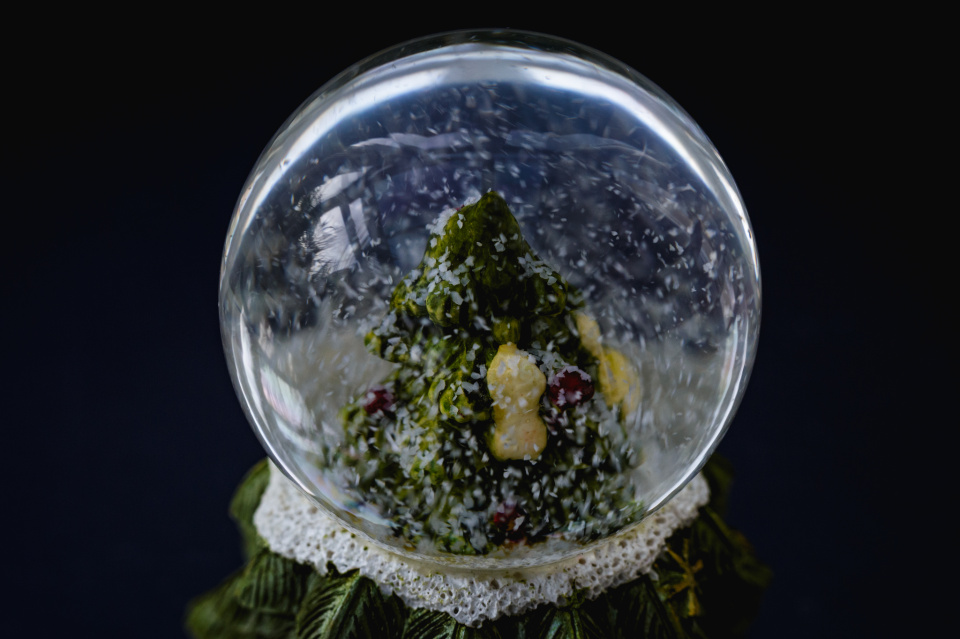 I’d be lying if I told you that this photo worked out as well as I’d hoped.

I met up with a friend in Broadway this morning, and during a brief shopping break between cups of coffee and talking each other’s hind legs off, I bought this little snow globe from the Cotswold Trading Company. It’s about 4.5cm across, and I had a vision of using it to produce a lovely seasonal macro for this week’s Tiny Tuesday.

Things might have panned out OK if I hadn’t forgotten all about it when I got home, but I spent a while fruitlessly trying to persuade Roley to eat something, and then got tied up in various bits of domestic engineering – and by the time I remembered that I hadn’t yet taken a photo the sun was very low and the light in the conservatory pretty strange. I very much didn’t want to faff around with darkened rooms and studio lights, so I just did what I could, hoping that the odd highlights and reflections would add to the interest of the shot, rather than making it unintelligible. I’m not sure that they did.

The news on Roley is rather worse than yesterday. R and I met up with Child Two for dinner this evening, and by the time we came in Roley was coughing a nasty, hoarse, wet kind of cough, and breathing fast and effortfully. He’s currently asleep in R’s study, where he seems to be happiest, and his breathing has slowed somewhat, but I’ve already had one phone conversation with the on-call vet and will be having another shortly. Graham hasn’t been involved in Roley’s treatment, but knows him and has access to his notes, and he has offered to pay a house call if we want him to – but I’m not sure at this stage that there’s much he can do. I rather doubt that we’re going to get as far as the scheduled surgery on Thursday.