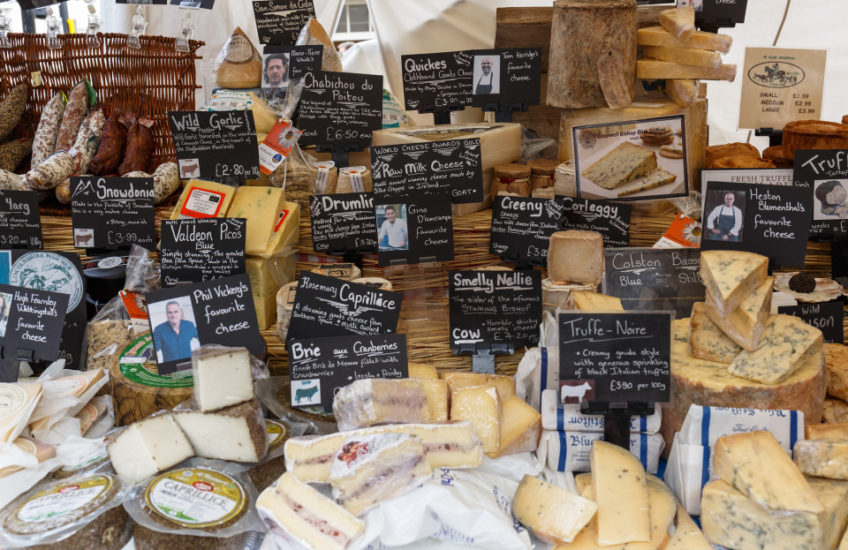 The annual Food Festival is running in Stratford at the moment. Last year I went on the Saturday afternoon, when the whole town was rammed, it was sunny and hot, and tempers (mine, at least) were fraying – and I vowed then that I wouldn’t go again this year. But the weather was quite autumnal this morning, and I thought that provided I went early the experience might be less hellish – so I zoomed off just after 9am.

In the event I could have given myself another hour in bed – I sailed into the southern end of town with no delays at all and found a car park space immediately, and when I walked up Bridge Street I virtually had the place to myself – apart from a lot of rather depressed-looking stallholders, who had presumably been setting up since dawn and were now standing around wondering where all the paying customers might be. It was a bit sad, to be honest, so I bought a Big Issue and went and read it over a coffee, emerging three quarters of an hour later to find that trade had now started on Bridge Street.

I did a couple of circuits of the stalls, taking photos the first time round and graciously accepting enough free samples not to need all the goodies I bought on the second pass. Although I’ve chosen to blip this image I didn’t actually buy any cheese – even speaking as someone who adores cheese, the smell of the cheese stalls was nauseating – but I was amused enough by all the labels on this one to hold my breath and take a couple of photos. I found myself wanting to ask for proof that such-and-such was so-and-so’s favourite – but speaking would have meant drawing breath, which I felt might be unwise.

Back at home I burned off all the free calories by washing the car, vacuuming and dusting the interior and polishing all the glass, and carefully removing the stripe of paint someone had applied to the outside of one of the mirrors in the past couple of days with GooGone. That’s twice I’ve cleaned the MX-5 in three months – which is exactly twice more than I washed the Golf in the entire four years I owned it. R was especially entertained to find me polishing some stubborn grime off one of the alloys with kitchen paper!

There are a few more Food Festival shots here.