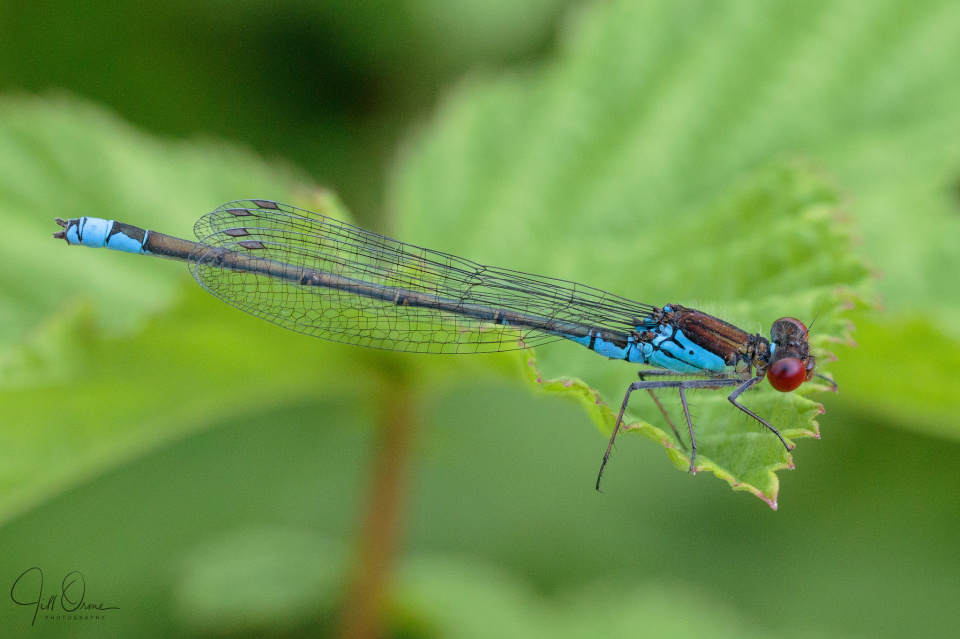 Someone told me recently that Croome is a good site for Small Red-eyed Damselflies, a species I’d never photographed, and I walked all the way round the estate today, carrying two cameras in sticky heat, looking for some and becoming increasingly grumpy at not finding any. Then I got home, uploaded my photos, and saw…

Broken shoulder stripes – tick
A coenagrion spur on the thorax, ending in a dot – tick
A black X mark on the top of S10 – tick
A blue wedge mark along the side of S8 – tick
Tomato-red eyes – tick….

Yup. It’s a Small Red-eyed Damsel Fly. Nor is this my only photo of one: I took about a dozen, including shots of pairs copulating and ovipositing, and totally failed to differentiate them from their (very slightly) larger cousins. I explained to R that it’s hard to pick up differences in creatures as small as these when you’re looking through the camera viewfinder and concentrating on fine focus – but that was nonsense really: I don’t usually have a problem deciding what I’m looking at, provided I’ve seen it before, and I doubt I’ll have any trouble distinguishing between the two Red-eyed species in the future. But to save time, frustration, and wear and tear on the camera shutter, I should probably make a point of having my reading glasses with me when I’m out taking photos, so that I can actually focus on the back screen of the camera, and see what it is that I’ve photographed!

My alternative candidate for today’s post was a handsome female Roesel’s bush cricket, which I spotted in the same patch of meadowsweet as this SREDF. She wasn’t happy to find herself being peered at, and scrambled away across the reed bed until she reached a surface from which she could leap.

Before I go, I’m no longer embargoed from sharing some nice photographic news I received a few weeks ago, which is that I have two photos in next year’s Worcestershire Wildlife Trust calendar. It’s a small thing, and I’d actually forgotten until I received my copy of the calendar in the post this morning that today was the announcement day; but it’s pleasing to me because I’ve only ever been a runner-up before, and this year I’m “Miss November” as well as having a small photo in the sidebar for April. All the winners are here, if you’d like to see them, and the runners-up are here.