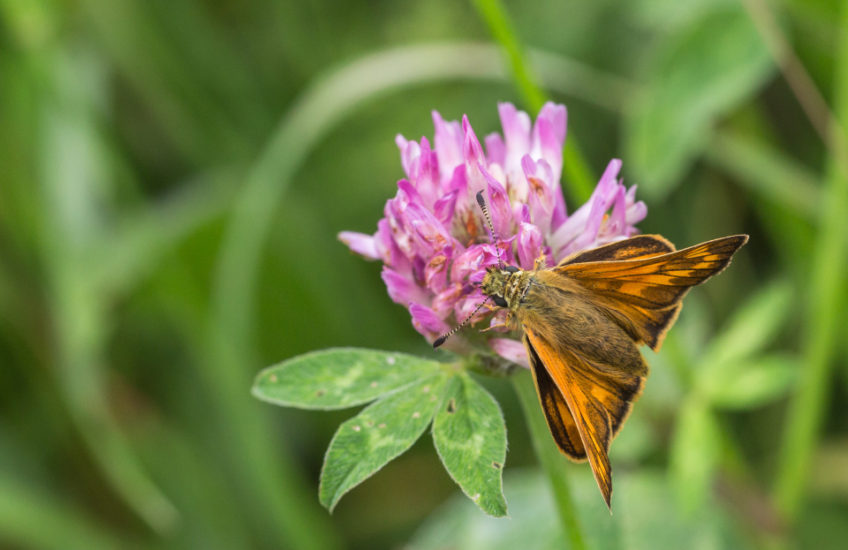 Well, maybe I wasn’t quite skipping – but I was delighted today to discover that the village was full of butterflies. I hadn’t expected this because it was very overcast, but it was also warm and muggy, and suddenly they were everywhere. On my photo walk I spotted numerous Large Skippers, including this one; Ringlets and Meadow Browns, vying for territory; Marbled Whites, which I’d only ever seen in photos before today; and one of the blue and red moths, which sadly I startled into flight before I’d got a decent shot of it.

I also caught a couple of tantalising glimpses of a large, dark butterfly I couldn’t identify, in an overgrown orchard beside the path which crosses the brook in the centre of the village. If I bump into the owner I might ask his permission to go on a little safari across this piece of land, which I suspect is a treasure-trove of bugs – by pushing as close as I dared to the brambles and nettles lining the fence I managed to get reasonable photos of a lacewing and some scorpion flies which were resting on them, but the barrier was just too high for me to get a good view of the butterfly, which was browsing across some low-level wild flowers.

I’ve put in an extra shot of the Skipper so that you can see its face. Not many butterflies are facially attractive, and some of them are downright disturbing, but I think the Skipper is rather pretty – maybe I’ve overindulged in wine gums again, but it somehow reminds me of a ginger cat. 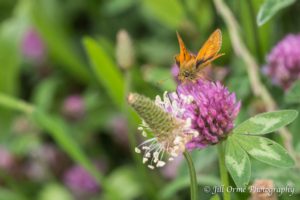 I should be on my way to bed now, but I’m not sure I can tear myself away from the EU referendum counts, which are starting to come through. It looks as though it’s going to be a very tight vote: at the moment Leave are marginally in the lead, but only 5 counts are in out of 382. The pound has been rising this evening, suggesting that the City believed Remain would win, but it has dropped sharply in the last few minutes since Sunderland voted Leave by a substantial margin.