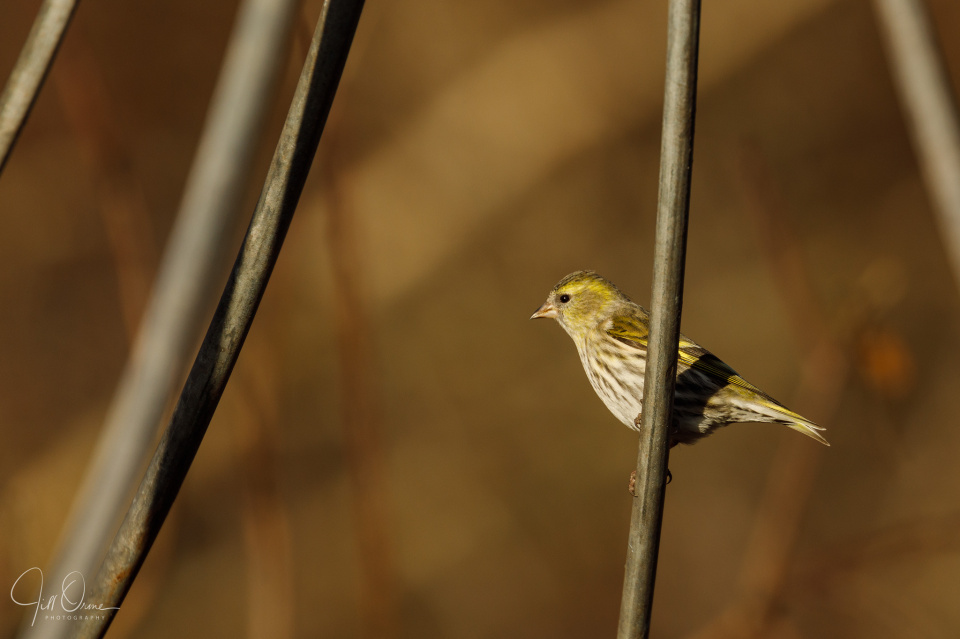 I’d never seen one before, but I thought it was probably a siskin (that’s what reading bird books for relaxation will do for you), and when I got home and checked it turned out that I was right. This is a female; the male has rather more dramatic looks, with a black cap and bib. I think she’s very pretty.

Siskins are widely distributed across Europe and Asia, and their numbers appear to have increased over the past few decades, possibly because of the commercial planting of pine forests. They eat a wide range of seeds, as well as insects in summer, but unlike some other finches they avoid feeding at ground level. As wild seeds become scarcer towards the end of winter they’re more likely to visit gardens; this one was waiting for a turn on a bird feeder in the show garden at Hillers this afternoon.

In the UK siskins are mainly resident as breeding birds in Scotland, Wales, and western Ireland, but outside of the breeding season they spread out through the rest of the country as well. They tend to flock, so it’s unlikely that this was a lone bird, though she was the only individual I saw today. Siskins are especially fond of the seeds of sitka spruce trees, which are widely grown commercially, and in a year when these trees fruit well relatively few birds will be seen outside of pine forests; but every few years the sitka spruce will crop poorly, and then siskins engage in a kind of mass migration in search of other food. It’s thought that each time this happens their core range extends a little further.