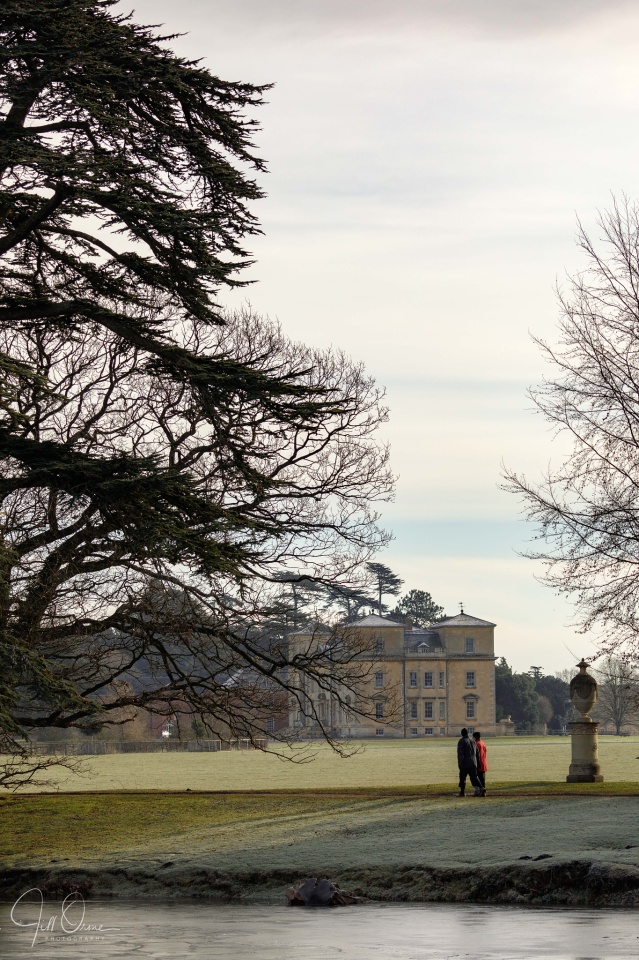 One of the many things I don’t understand about the rules of composition one is advised to use in photography is that whereas it’s apparently unacceptable to include the sun, because something so bright will dominate the image and pull the viewers eye straight to it and away from everything else, it’s highly recommended to include a person in a red coat, because that will pull the viewer’s eye straight to it and act as a focal point for the photo…. Just a small pet grumble.

Anyway. This was Croome this morning, where as you can see, it was pretty brisk. The whole of the artificial lake and river were frozen, except for a single narrow strip underneath the low wooden bridge between the two – prompting R and me to speculate on the insulating qualities of wood that we felt must be responsible for the phenomenon, and me to hope that our conversation wasn’t being overheard by anyone with a proper understanding of thermodynamics. 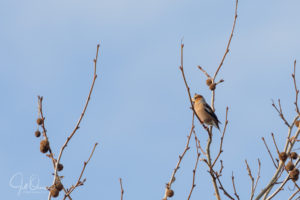 Today’s extra: I’m not claiming that it’s a good photo, but I am claiming that it’s a hawfinch – which is ironic, because I’d been looking very carefully for hawfinches all the way through the shrubbery, but gave up the hunt when we emerged into the open, telling R that I’d only seen one report (without photographic evidence) from Croome this winter, and that I was sceptical that there were any there at all. I then spotted a bird that was so distant I couldn’t make out its features properly, but of which I thought I should grab some record shots so I could identify it later; by the time we got to the café, and I put on my reading glasses, blew up the shots on the back of the camera, checked against some stock photos on my phone, and realised what I’d just snapped, it was too late to go chasing back to try to get a better portrait. On the way back to the car I spoke briefly to a chap with two cameras and one very expensive lens, and on hearing where I’d seen the hawfinch, he said “Oh yes – that’s where they usually hang out.” They, you notice; and usually. I shall have to make a return trip, and stake out that particular tree.

The hawfinch is Britain’s largest native finch, but despite that can be surprisingly difficult to find, because it tends to be quite shy and spends a lot of its time high up in trees. It uses that massive bill to crack seeds, and even fruit pits, and prefers to live in mature woodland; but pressure on this type of habitat has seen it decline in many parts of the country, and it’s now a red list species. It’s thought that there may be less than a thousand breeding pairs in the UK, though there can be at least a ten-fold increase in the winter, when birds immigrate from the Continent. Last winter was an especially good one for hawfinch watchers, but this year there have been relatively few recorded sightings. I’m now wondering if there may actually be resident birds at Croome – but even if there are, the chances of seeing them in the summer when the trees are in leaf are very remote indeed.