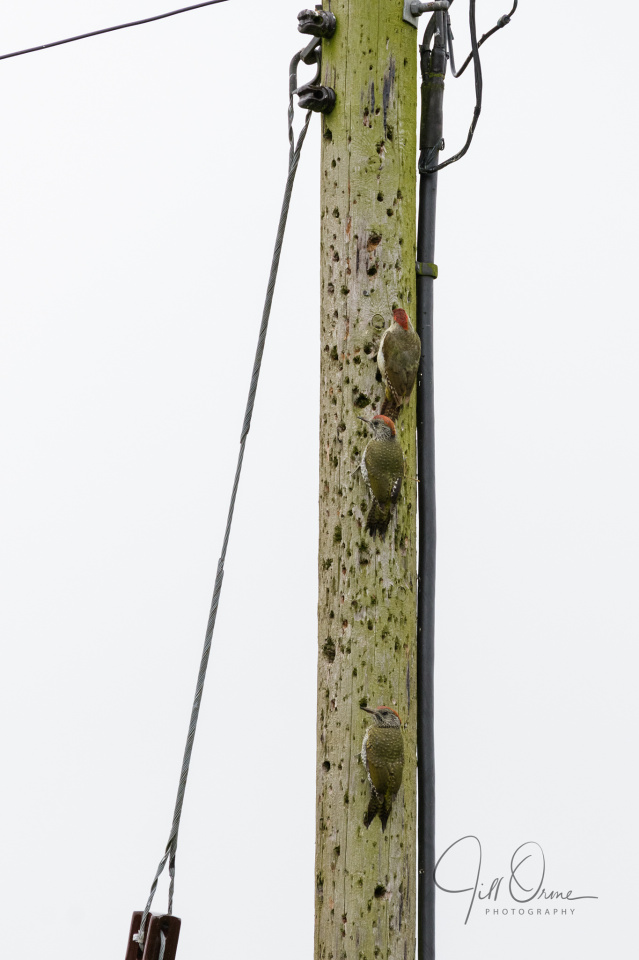 I was on my way out of the house this afternoon, aiming for Toddington and some photos of steam trains, but froze with my hand on the back door handle when I saw three green woodpeckers grubbing for ants in the lawn. Dropping my bag (which contained the 5D plus 24-70 – suitable for trains, but not for wildlife at that distance) I scooted back upstairs for the 7D and 70-300, and was relieved to get back down into the kitchen and find that they were still eating. Once I had a long lens on them I could see that there was an adult female and two juveniles, one of which looked older than the other.

Shortly after I began taking photos through the window in the back door something startled the youngsters, which flew into one of our apple trees; and about a minute later the mother took off as well, collecting the kids and removing them to this telegraph pole on the far side of our neighbours’ garden. It was only when she began shouting at something that I realised there was already a great spotted woodpecker higher up the same post.

It’s not unusual for us to see – and hear – great spotted woodpeckers attacking the telegraph poles in the village, but I’ve never seen greens do this before, as their beaks are softer and they’re almost exclusively ground feeders. In several of my photos one or other member of the family seems to be peering at the wood, and R and I speculated that once the GSWs have damaged the pole the pits and crevices may be colonised by insects – certainly there was something that made the greens want to stay there for several minutes before flying away.

In the end I gave up on my plan and didn’t go to Toddington: the steam trains will be there again next week, and I don’t expect I’ll ever get a photo like this again. There’s a set of shots here, if you’d like to see more.