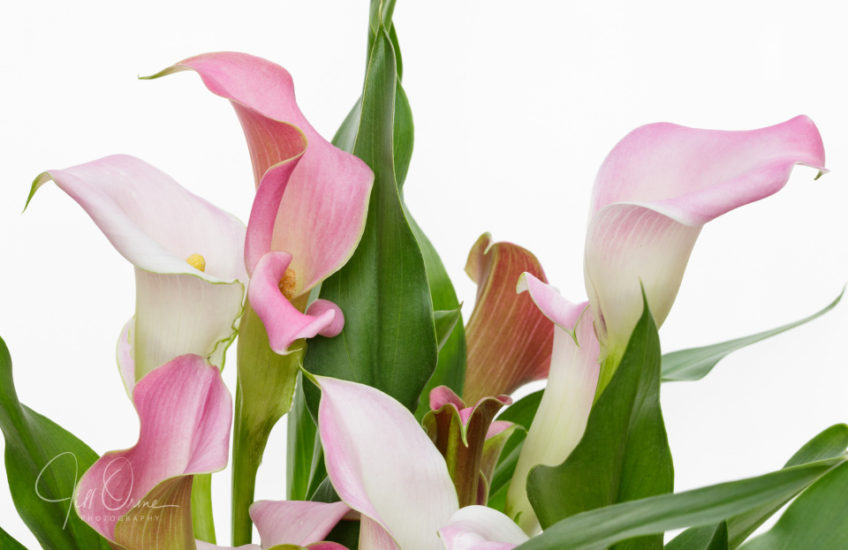 I love calla lilies and find it very hard to resist buying them, though it’s frustrating that I’ve never had any success in bringing one through the winter. I was shopping for odds and ends at Waitrose this afternoon, saw this in their plant section, struggled with myself for a few minutes, and then gave in and bought it. I’m currently thinking of keeping it indoors – though to be honest, I’m so neglectful of my house plants that it might stand a better chance if I were to find an empty bit of border outside and simply plonk it in.

I thought when I brought it home that I’d sacrifice one of the blooms and photograph it on my light pad, and eventually I may, but today I couldn’t quite bring myself to cut one out, so instead I stood the light pad on end and photographed the whole plant in front of the bright backdrop. I quite like the effect.

This evening R and I went to the new cinema in Stratford (nice, though pricey) to see Dunkirk. I did enjoy the film, and – I won’t lie – I shed the odd tear when the flotilla of small boats made it across the Channel, but it’s a bit of a mystery to me that it’s been hailed as a masterpiece in certain quarters. There are quite serious issues with both the script and the production, and some of the editing is frankly bizarre (possibly deliberately, to fudge over the cracks in the narrative). I won’t give you a list in case you haven’t yet seen it, or have seen it and were so swept away by the story that you didn’t notice, but driving home R and I had one of those “Did you understand this bit…?”, and “What on earth was that supposed to mean?”, and “Surely that wasn’t what that would have looked like…?” conversations, and the more I think about it now, the more irritated I am by what seems like a waste of a decent cast and a truly extraordinary story.