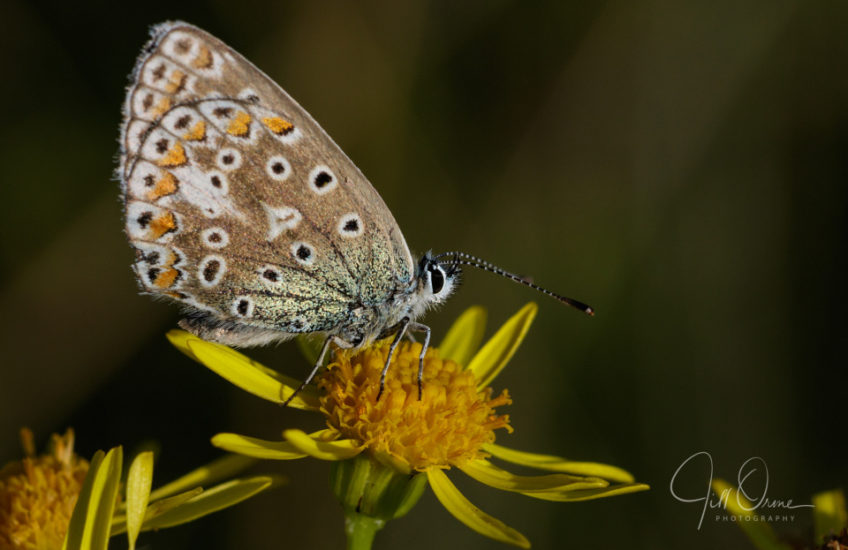 I couldn’t sleep last night; eventually I gave up trying and went out for a 7.30am walk, and was rewarded by catching the lovely sight of this Common Blue waiting to warm up, and reflecting the low, early light. Given its unusually calm demeanour and the position of the plant, I thought at first that it was the same butterfly I blipped last Thursday. But then she obligingly spread her wings and demonstrated that she was a female. 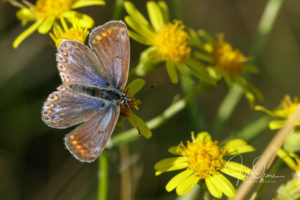 I also found a dewy Roesel’s Bush Cricket and a pair of brand-new Bombus ruderatus queens nectaring on a thistle; but the cricket was utterly horrified by me and desperate to escape, and the thistle was waving wildly in the strong breeze, so I didn’t manage a photo of either that I’d say was more than a record shot. And even though I’ve posted a lot of butterflies recently, I can’t be too apologetic about this one: even as I pressed the shutter I was pretty sure that this image would be a keeper.

Back at home I went down the garden and conducted a Cinnabar caterpillar count; I found seven, which is one less than R and I counted at the weekend. Boss Baby has disappeared, so I hope that he’s pupated, rather than having been predated. I also paid a visit to the hedgehog house, which appeared to be empty yesterday, and was pleased to see that the most recent handful of cat kibble has been eaten, and that someone seems to have pulled some hay across the inner entrance to the tunnel.

I’ve tagged these shots for Day 1 of the 30 Days of Composition challenge in Emma Davies’ workshop A Year with My Camera, which is Viewpoint: the extra was taken more or less from above, and for the main image I squatted down to be as near level with the butterfly as I could manage.