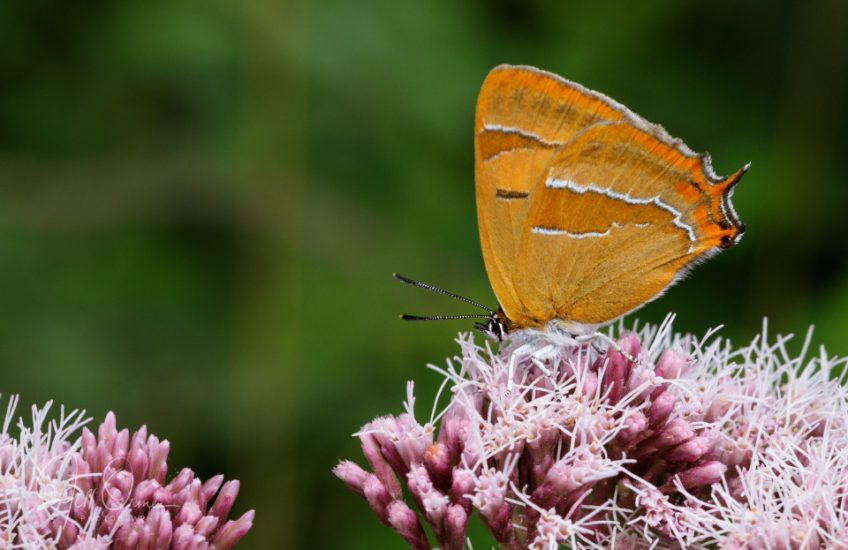 Isn’t it beautiful? I really think it could do with a name that doesn’t sound like the kind of stain your cat makes when it vomits on the carpet. R suggested that something like Sun Burst would be more appropriate; I may start a petition.

I drove back to Grafton Wood today through some quite severe weather, with a Bad Feeling about the way the afternoon was likely to go. Luckily the rain stopped a few minutes after I’d parked the car, but when I got into the wood there were very few insects to be seen; by the time I turned onto one of the main rides though, the sky was starting to clear, and the bugs began to emerge. There were scores of Meadow Browns and Gatekeepers basking and nectaring, and quite a few Silver-washed Fritillaries patrolling, but I’d reached the end of the ride before I found a Southern Hawker posing on a dock plant and managed to bank some decent shots – and I still hadn’t seen a Hairstreak, which was what I’d specifically come to find.

I walked slowly back up the ride, mentally debating whether to carry on into another part of the wood or turn for home, and then reached the fork in the path and found three people with cameras (one with two cameras, actually, and a positively humongous lens) clustering around a clump of hemp-agrimony and snapping away at this solitary Hairstreak, which showed absolutely no sign of caring, or even noticing, that it was receiving so much attention. The time stamps on my raw files show that I was taking photos of it for twenty minutes, and I think that the other people had been there for several minutes before I arrived, so it certainly had a very good feed. The man with the humongous lens was confident that it was a female – and so it may be, but having examined lots and lots of photos on line and in my favourite reference book Butterflies of the West Midlands, I can’t say that I’m certain. Males emerge before females, but on the other hand are shyer and more likely to feed on honeydew up in the tree canopy, rather than on nectar; they’re also slightly smaller and less well-marked than the females – but that’s not helpful either, if you only have one specimen in front of you. The upper wing surface markings are quite different – females have a bright orange mark on the forewing that’s absent in the males – but this individual didn’t spread its wings once in the time we were watching it.

The Brown Hairstreak is one of the last butterfly species to emerge in summer – as you can see from its pristine condition, this specimen is absolutely fresh – and the adults fly for just a few weeks, during which time they will mate and the females will lay their eggs on sheltered, south-facing growth of either blackthorn, wild damson, or bullace shrubs (blackthorn being the favoured larval foodplant). The part-developed larvae overwinter within the eggs, which look like tiny sea urchins and are fairly conspicuous; they’re especially vulnerable to winter cutting of blackthorn hedges.

Nationally this is listed as a species of conservation concern, with its previous distribution across southern England and Wales believed to have contacted by as much as 35% over the past twenty years; the removal of hedgerows is especially blamed for this decline. Butterfly Conservation and Worcestershire Wildlife Trust have worked closely with farmers in the region of Grafton Wood across the past forty years, encouraging them to maintain hedgerows in a state which helps the Brown Hairstreak, and though the Wood itself is generally said to be the butterfly’s stronghold in the West Midlands, annual winter egg counts by BC volunteers over the past few years have yielded some results from Droitwich in the west to Redditch in the east, and occasionally even over the border in Warwickshire.

I’m thrilled skinny to have seen this lovely creature today, and very happy that I decided to take a chance on the weather and go to Grafton Wood. When I finish processing my shots I’ll post a few more in my Grafton album on Facebook.