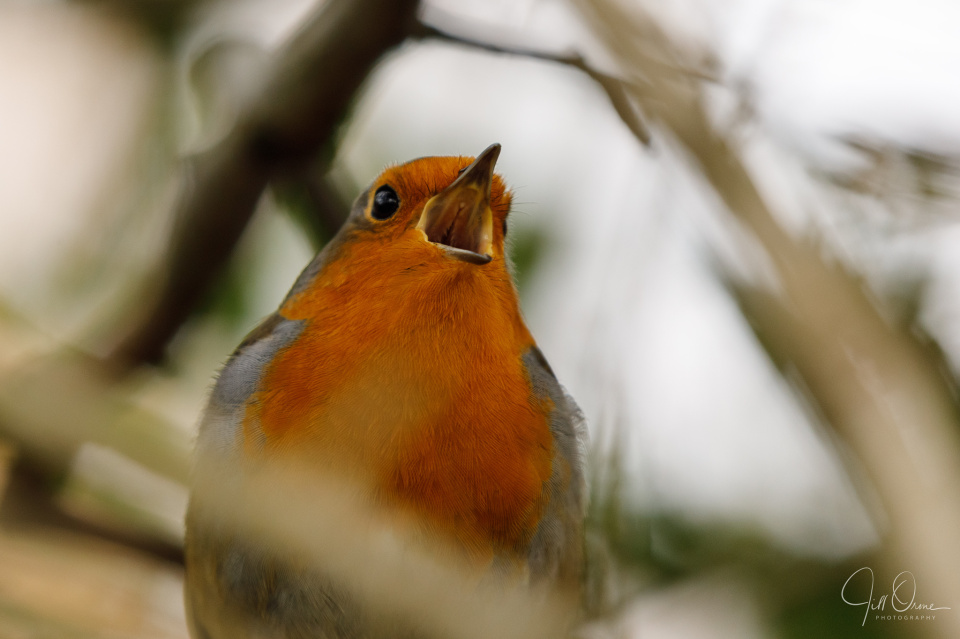 More shopping (pretty much all done now); cards written; food order tweaked for the umpteenth time; presents wrapped. I’m writing this while doing accounts with my other brain, and then I’m going to watch Groundhog Day while making another batch of dulce de membrillo. R, who has volunteered (perhaps a little heavily) to stir the quince paste through its napalm stage, says that Groundhog Day will be appropriate to this activity.

We were walking back to the car over Lucy’s Mill Bridge this morning, when I was pulled up in my tracks by the sound of glorious singing. “Robin!” I said, “But where…?” R tracked it down to the middle of a holly bush, and I held up the pedestrian traffic for a minute or so by taking its photo.

“Can you get that?” asked R. “Yes,” I said. “No problem.” “Manual focus?” “Good heavens, no – my eyesight isn’t good enough. The autofocus picked it up.” “I’m impressed!” he said, when I showed him the back of the camera.

I shrugged it off, but actually I was fairly impressed myself – as you can see from the cluttery bokeh, the robin really was deep among the branches in the centre of the bush. I was even happier when I uploaded the shot, to see the detail of the inside of its tiny mouth: I don’t think I’ve ever managed to capture the roof of a robin’s mouth before!