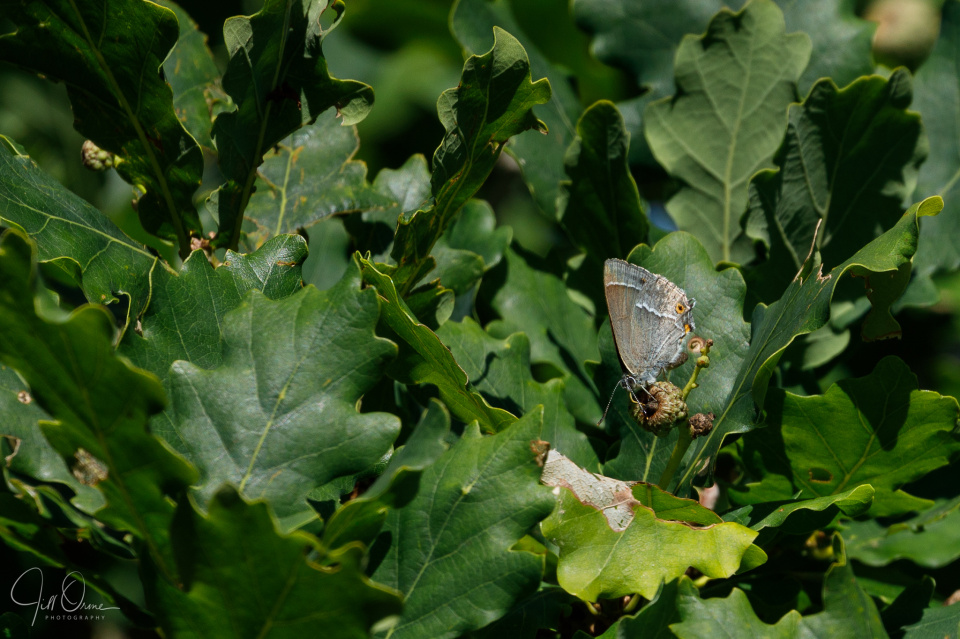 This isn’t my favourite photo of the day, but has to be my blip because it’s my first Purple Hairstreak of the year. In fact the last one of these I posted was back in June 2018, at the peak of what turned out to be a wonderful season for this tiny but charismatic butterfly. For a few weeks that summer you could hardly turn around in Trench Wood without tripping over Purple Hairstreaks – so it was something of a shock to everyone last year that there were hardly any to be found. Having seen a few photos recently of this year’s brood, I went out this morning determined to see some myself, and on arrival at the wood I was lucky enough to bump into my friend RC, who was able to point out the specific oak in which he’d photographed them yesterday.

It was a startlingly cold morning, but the butterflies were already beginning to move around high up in the tree, and as the temperature rose over the next half hour they became more active and came a little lower, where they were slightly easier to photograph. After a while I decided to go and look for dragons, and it was over an hour later when I circuited back round to this oak and found RC still there with two other photographers. The four of us stood for a while longer, staring upwards, necks cricked, willing the Purple Hairstreaks to come down to ground level, but the only one that accepted the invitation promptly zoomed off somewhere else without allowing anyone to get a lens on it. So this was taken with the long lens and is very cropped – but given the size of the butterfly, it’s not a bad record shot. Although everyone wants to get an image of the purple overwings of this species, I really love their iridescent grey underwings, which appear silver and shimmer in strong light – in fact I tend to think of them as Silver Hairstreaks, and have to remind myself not to call them that.

I’ve posted a few other highlights of my visit to my Facebook page, if you’d care to see them. Also, even though I’m gritting my teeth here with furious jealousy, I have to point you towards a beautiful photo that RC took at Trench Wood this morning (long before I arrived) of an Emerald Damselfly. You can go right off people, I find.