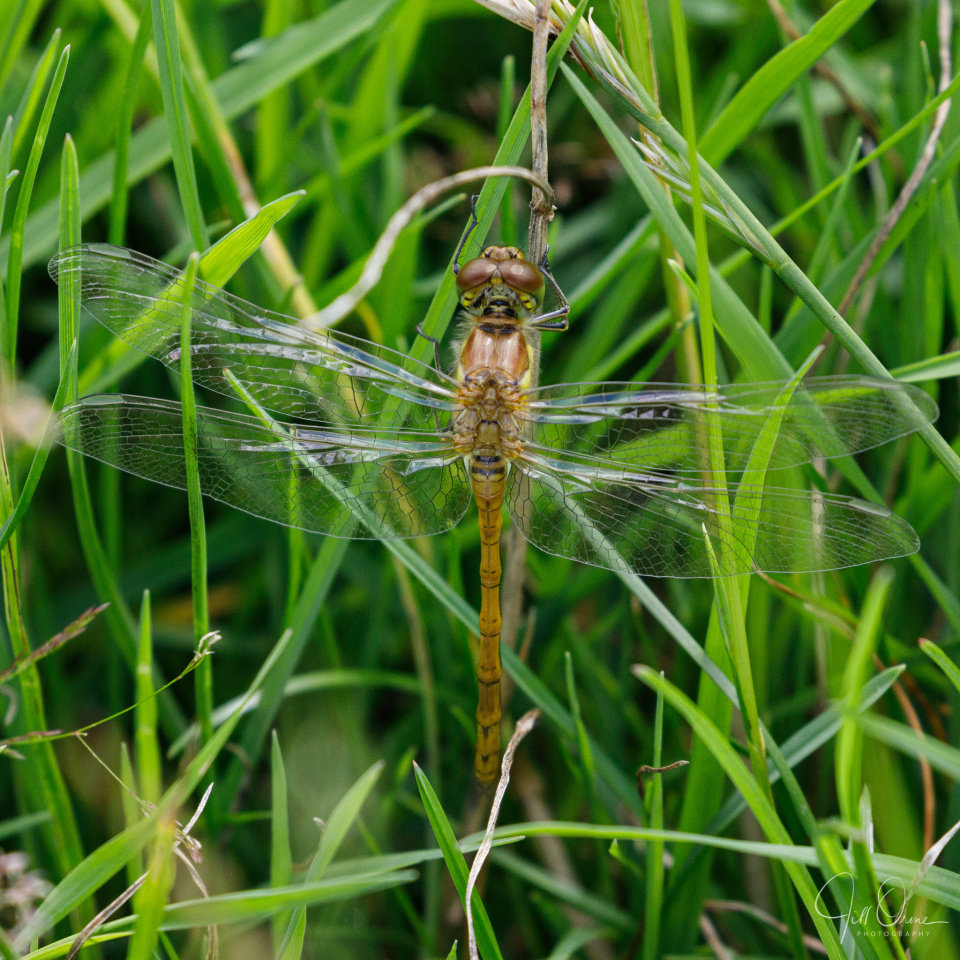 You can see that this is a very fresh dragonfly by the fact that his wings and body are still soft and his colouring’s very pale. During this teneral phase of their lives insects are weak and vulnerable to predation, which is why this Common Darter – which I hadn’t seen until I nearly stepped on him – fluttered away from my feet and dropped back down into the grass where he hoped I wouldn’t be able to find him. Happily for me, though less so for him, he was wrong, but after I’d taken a few photos I left him in peace. By the way, despite his pallor, he’s identifiable as a Common Darter by the light stripes along his legs.

I took a trip to Grove Hill this afternoon in the hope of plentiful dragons, but the only Odonata I found at the lower pond were this chap and a single Azure Damselfly. The top pond was a little busier, with two female Broad-bodied Chasers ovipositing close together, one in her prime and the other very much not; and several males of different ages, zooming around and bickering. There was also a male and a female Emperor, though the female disappeared as soon as she’d deposited a batch of eggs, leaving the male patrolling the pond, and being harassed by the Chasers. And finally I saw a single male Black-tailed Skimmer – a species I hadn’t recorded at Grove Hill before, and which I probably wouldn’t have caught on camera today if he hadn’t been checking out the elderly female Chaser. I’ve put one of my record shots of the two of them on Facebook, if you’d care to see it.

Lockdown Family Film Club this evening was The Mererowitz Stories, which I enjoyed, though R thought that parts of it were like being repeatedly hit around the head. The difference might be that I grew up in a family that did shouting, and he didn’t, so it’s probably fair to say that if you’re reasonably comfortable with conflict, and if neither Adam Sandler nor Ben Stiller makes you want to leave the room, this is an entertaining way to spend an evening. Another plus for me is that I may now be able to tell the difference between Adam Sandler and Ben Stiller, which I never could before.