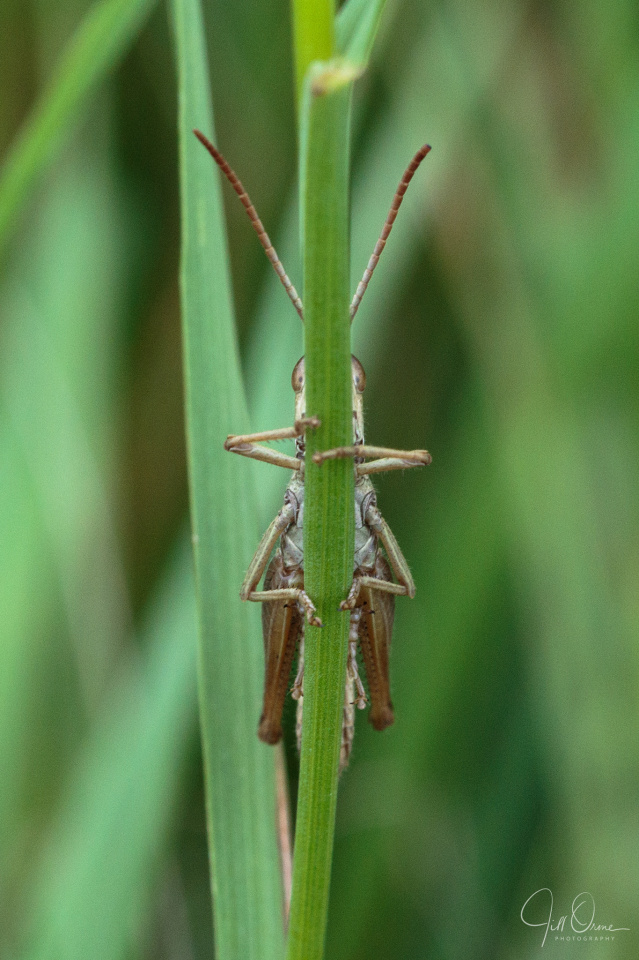 I spent much of the afternoon stalking grasshoppers and crickets around the village. It isn’t fair, really, because they absolutely hate it – Orthoptera are so far down the food chain that almost everyone eats them, so the closer you get to them with your macro lens, the more certain they are that they’re about to meet their Maker. I’m afraid I can’t tell you exactly what this is – it’s one of the Chorthippus species, I think, but it’s still a nymph, and even the recording scheme people say that at this stage they struggle to tell them apart. When it realised that I’d spotted it, it slowly edged round to the far side of the grass stalk, in the hope that I’d think it wasn’t there any more. 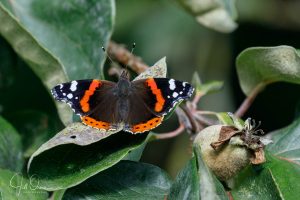 The extra is one of three Red Admirals that were down in the wild garden late this afternoon, and which, frankly, were doing my head in. I was searching for a very fresh hawker that R and I had both seen, and about which I was unreasonably excited because although its body was still too pale for the markings to be made out, its wings were a vivid iridescent copper colour – suggesting that it might have been a Brown Hawker, a species I’ve never seen in the village before. I’d failed to get a lens on this dragon, due to its erratic flight and my own incompetence, and it had disappeared into the trees, but from time to time I did catch a distant, tantalising glimpse of it, and I kept tracking it and hoping that it would come back down to eye level. Meanwhile the Red Admirals were zooming back and forth and bickering with each other, and although their wingspan is only about three quarters of that of a hawker, it’s still wide enough (and red enough) to have kept stopping my heart at regular intervals.

I was already quite irritated about this when one of them decided to try to clear me out of his territory, and started flying at me repeatedly and circling my head so closely that I could feel the air movement from his wing beats. I don’t like to admit that I allowed myself to be chased back to the house by a butterfly, but in the end the situation became so annoying that I’m afraid that’s what happened. Mad (and maddening) as they are though, I do like to see a perched Red Admiral; I’ve chosen the quince tree image here in preference to the one in which the same individual took possession of my spare camera.

My third-favourite shot of the day has gone onto Facebook, if you’d care to see it. It’s a photo I took through the kitchen window this morning of a male green woodpecker, whose search for ants brought him almost to the edge of the patio.