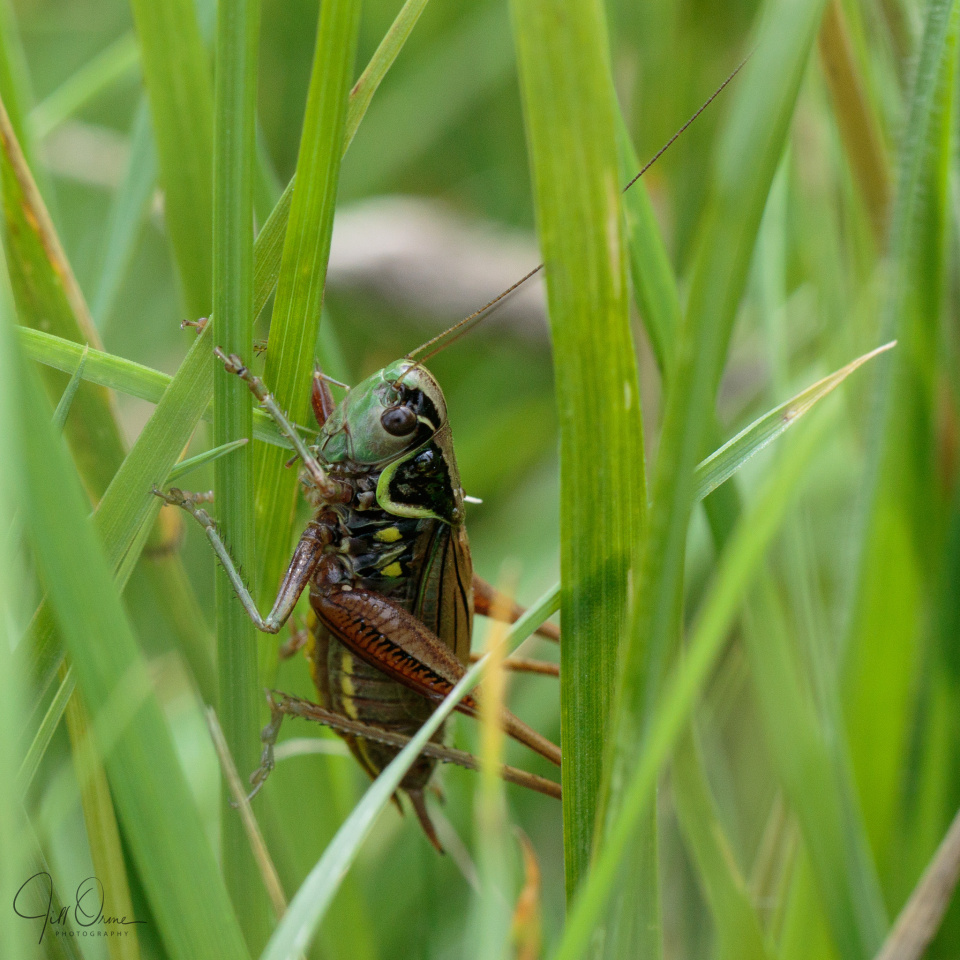 After a pleasant weekend had lulled me into a false sense of security, autumn returned today. This kicked the legs out from under my plan to go on a little field trip, hunting dragons, and made me quite sad and grumpy. Eventually, realising that if I wasn’t careful I’d be posting a photo of my dinner, I took advantage of a brief spell of almost-sunshine and wandered round Tilly’s field, looking for grasshoppers and crickets.

This meadow is producing some really nicely marked Roesel’s Bush Crickets, and today I found both male and female specimens. This is a male, and he’s really gone to town on his outfit – I especially like the two clashing shades of green, and the red accents on his legs. The female is less outré, but if anything I’d say she’s even more striking. Sadly she has the measure of me by now, and did her very best to deny me any good photos today, so I’ll have to refer you to one I took of her a few days ago, when she was sitting calmly out in the open, displaying her gorgeousness to the world.

I’ve been wondering how it is that Roesel’s Bush Crickets have now arrived in this meadow, when previously I’ve only ever photographed them in the butterfly field, about half a mile away. Looking at those legs you’d think that they were more than capable of bounding from one place to another, but in fact they’re surprisingly sedentary: once you’ve found one, you can be reasonably sure that it will be somewhere close to that spot the next time you look for it, and next year its offspring will appear in more or less the same place. It’s also noticeable that the Tilly’s field specimens are quite differently marked to the ones I find in the butterfly field, which are always brown and cream. But each year a proportion of RBCs are macropterous (long-winged) and disperse from their natal sites, and it’s quite possible that last summer some green vagrants flew in, liked this field, and stayed to breed. I’m hoping that this generation will be able to complete their life cycle before the meadow is cut for winter feed, and that I’ll find more green Roesel’s next year.