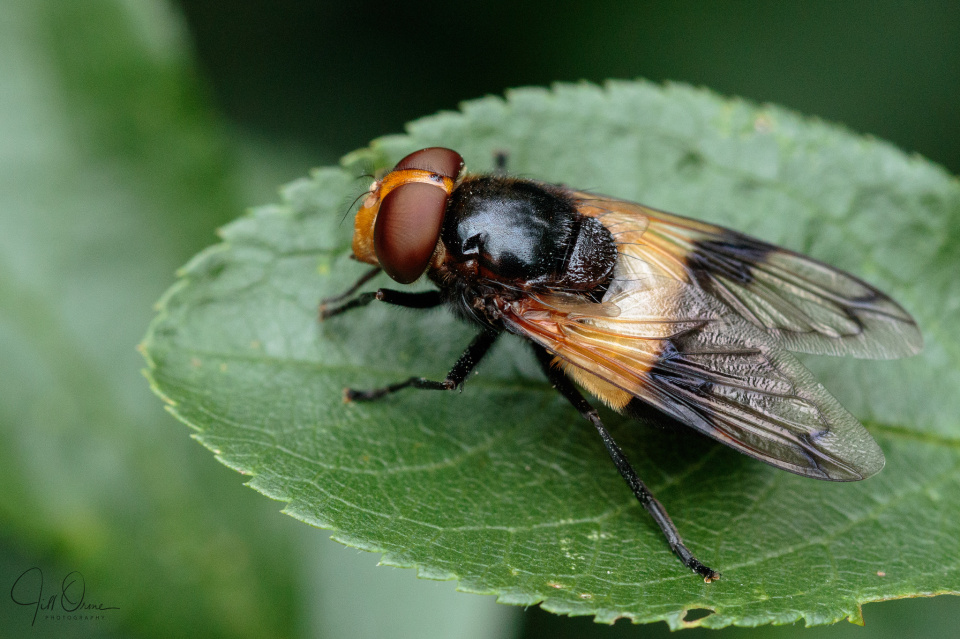 I like the word pellucid, though I can’t say I get the opportunity to use it much in general conversation. It means  transparent or translucent, and at first sight doesn’t seem to have much application to this rather dark hoverfly, which I photographed on the hedgerow in the darkest corner of Tilly’s field, on a dark and dreary afternoon. But if this Volucella pellucens had spread her wings you’d be able to see that the white band at the top of her abdomen is indeed translucent. Why, I have no idea – it’s a feature that doesn’t seem to have any practical purpose, but it makes the species instantly identifiable.

All of the Volucella species are quite easily spotted, if only because they’re all so large. V. zonaria and V. inanis both look superficially like hornets – which doesn’t necessarily serve them well among people who think that hornets are dangerous and should be exterminated. V. bombylans looks like a big, scruffy, grumpy bumblebee. V. inflata is shiny and globular, and does indeed look as though someone has attached a pump to it and blown it up. And V. pellucens here, commonly called the Great Pied or Pellucid Hoverfly, simply doesn’t look like any other kind of fly. If you look at this full-screen (which I’d really like you to, because I’m quite pleased with the focus) you’ll see one of the other characteristic features of this genus, which is that their aristae – the little prongle sections of the antennae – are plumose, or feathered, which I think is rather attractive. (When I first bought a book on hoverflies and started trying to learn about them, I misread this as “plumrose” – which I think might have been a brand of chopped, pressed, tinned meat back in my childhood, and probably indicates that I’m now entering my dotage.) 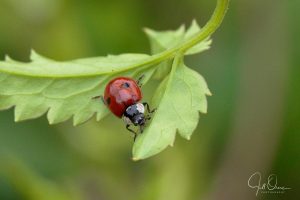 I’m posting an extra today, and it’s the smallest thing I photographed this Tiny Tuesday. This year seems to be a very good one for ladybirds – certainly my garden is full of them, and mostly they’re our native 7-spots, rather than the bigger immigrant Harlequins. But today I caught sight of a tiny red blob on the foliage of my clematis tangutica, and when I trained the macro on it, it turned out to be Adalia bipunctata, the 2-spot ladybird. At the same moment I could also see a 7-spot and a Harlequin close by, and I tried to get a comparison shot of the three of them, but it proved too difficult; if I’d managed it you would have been able to see that the 2-spot is only about 5mm in length, whereas the 7-spot is around 8mm long, and the Harlequin larger still.