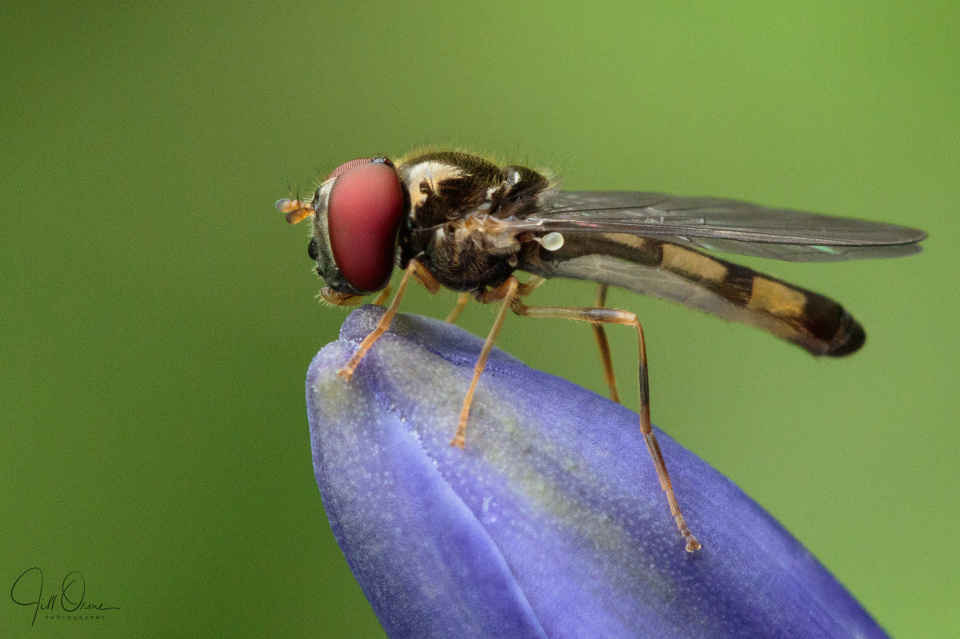 Another day of lowering skies and occasional showers discouraged me from going road tripping, and in the end I contented myself with a bug safari around the garden. Despite the dire (and dour) light, I made some quite nice discoveries, but my favourite photo of the day has turned out to be this one of an extremely common hoverfly.

Having given you one of the UK’s biggest hoverflies yesterday, today’s offering is one of the smallest: Melanostoma scalare comes in at about 8mm in length, and males like this one are also noticeably narrow, their abdomens being much longer than they are wide. In my experience they’re highly skittish, and not at all keen on humans, with or without cameras, but this one was asleep on an agapanthus bud, and having spotted his deep red eyes against the blue petal as I was walking past, I was able to step into the middle of the flower bed and photograph him from multiple angles before he woke up.

Despite being very common, Melanostoma scalare isn’t especially well understood – which may support my personal observation that it’s a rather secretive species. It’s known to favour grassland sites, but is also found in woodland and gardens. Adults feed on pollen and nectar via that wonderfully hairy proboscis, but their larvae are believed to eat aphids and other small invertebrates.