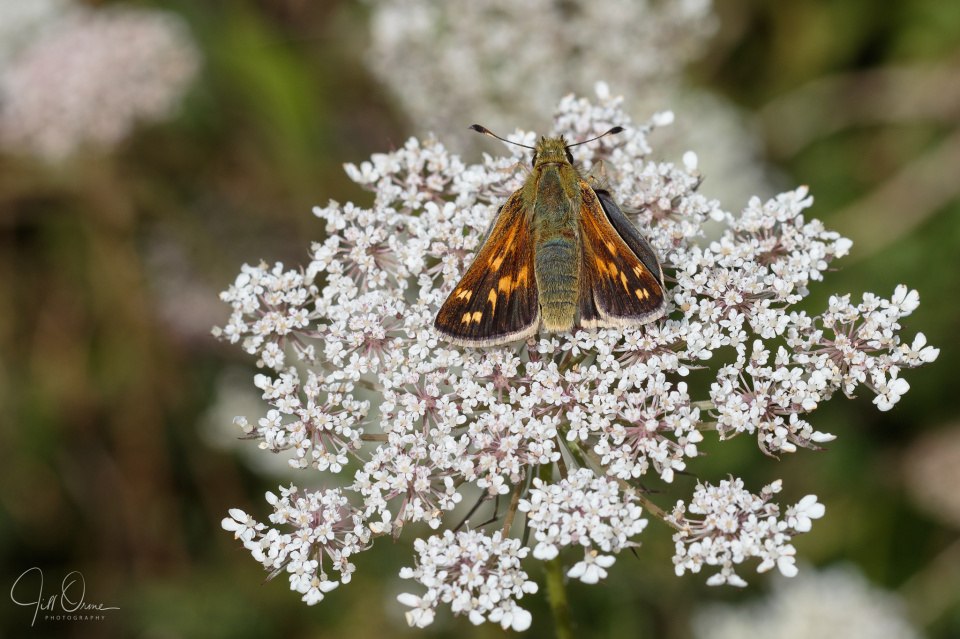 You would not, of course want to be looking around at the scenery if you were driving yourself along the M40; but if you’re ever a passenger in a car going south through what’s known as the Stokenchurch Gap, the deep gorge cut through the Chiltern Hills between Junctions 7 and 5 of the motorway, and you’re able to look up to your left, you might see some feral goats scrambling nimbly around the precipitous slope. And if you’re not lucky enough to see the feral goats, you might catch sight of a feral photographer, inelegantly stumbling and slithering around on the feral goat trails, trying to get a half-decent shot of the rare Silver-spotted Skipper while not falling off the reserve and landing head-first on the motorway. At least, that’s what it felt like to me this afternoon. I kept telling myself that there was a fence, and some trees, and quite a lot of scrub, between where I was standing on about four inches of goat track terraced into the slope, and the point at which you’d actually topple over the edge… but the only way I could manage not to whiffle was to chat to the butterfly, and when she left and I had to scramble back up the scree to rejoin the normal human path, I needed to hum a little song out loud to take my mind off things. It wasn’t my very finest pitching, but for once I think I was probably sharp, rather than flat.

Still, I survived, and I got what for me is a new species. The Silver-spotted Skipper is a specialist of closely-grazed chalk grassland, and changes to land management in the C20th, coupled with the devastation wreaked on the rabbit population by myxomatosis, caused it to decline almost catastrophically. Whereas it used to exist in pockets of suitable territory throughout England, it’s now confined to the chalk downlands of the south; and though active conservation measures have improved its status over the past forty years, it’s still regarded as a vulnerable species. The Chilterns mark the northern limit of its range at present, though I pointed out to this lovely female that Prestbury Hill in Gloucestershire would be excellent territory for her, as well as being less than half the distance from home for me, and a slope that I could at worst fall down, rather than off.

Silver-spotted Skippers and feral goats aren’t the only attractions at Aston Rowant – the view is spectacular from parts of the reserve, for one thing, if you can look at it without getting dizzy and falling over, and it’s a great place to see red kites and buzzards hunting. There are also lots of other interesting invertebrates, including some other downland species of butterfly; I’ve put a handful of extra shots on my Facebook page, if you’re interested. I was a little surprised not to see any Adonis Blues today, but I’d expect them to be out at Aston Rowant soon, because I bumped into a chap who said he’d just seen some at Yoesden, a few miles down the road. I had half a mind to swing round there after I’d bagged my SsS, but by the time I made it back to the car all I could think about was finding a cup of coffee and then getting back home, so the Adonis Blues will have to wait until another day.