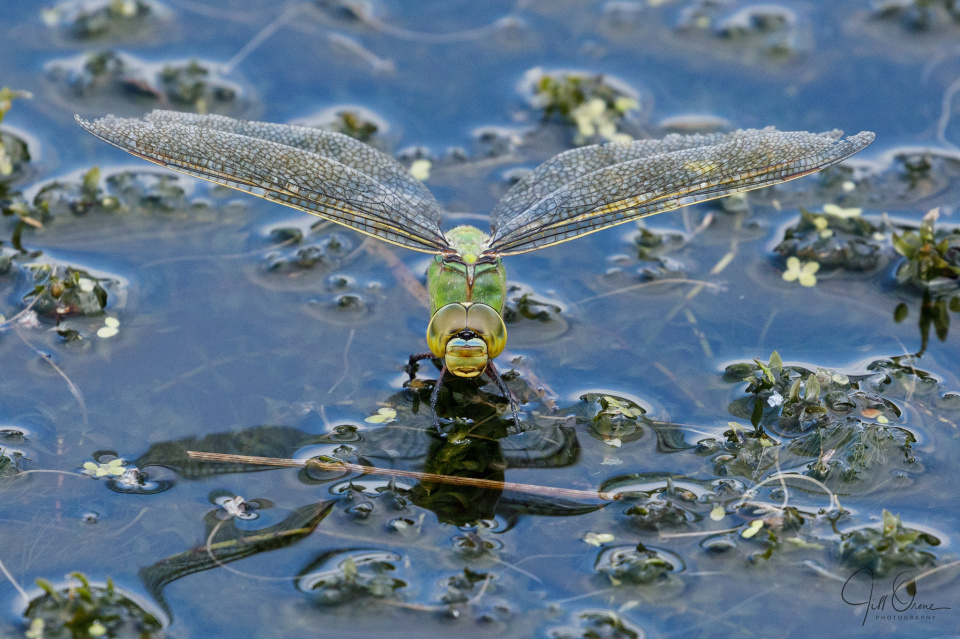 They’ll be charging me rent at Grove Hill soon, if I’m not careful. This morning I thought Four visits in four days really would feel like the beginning of a habit – I’ll go somewhere else today…. but the morning ran away with me, and then there was a storm, and when it cleared I couldn’t find any bugs in the garden, and another storm was forecast, and it was nearly 4pm, and Grove Hill’s only seven miles up the road… and in the end I thought Oh well, and threw my gear in the car and zoomed off.

It wasn’t ideal dragon weather by any means, and all the boys and most of the girls were tucked away in their roosts; but this ageing Emperor was doggedly laying a clutch of eggs, and carried on even though she was clearly not pleased to see me, and even when it began to rain. I don’t think she’s the same dragon I posted on Saturday – that was quite a fresh female, and to have sustained so much wear in two days would be unlikely. She’s also not the second ovipositing Emperor I photographed that day, which was a blue form specimen, with colouring that made her look like a male, and caused me to wonder for a couple of seconds what on earth a male Emperor was doing at the base of the rushes with his abdomen deep in the water. So I’m confident in saying that there are at least three females using this small pond to create a new generation.

Emperors lay their eggs in vegetation below the surface of the water. These hatch into nymphs about three weeks after being laid, and usually take nearly two years to pass through all the larval stages, with a synchronised emergence taking place in the late spring. Sometimes though, they complete the larval cycle in a single year, in which case metamorphosis isn’t synchronised, and individual dragonflies emerge over a longer period; that may be the situation with this pond, because there seem to be some quite fresh specimens around, as well as some older ones.