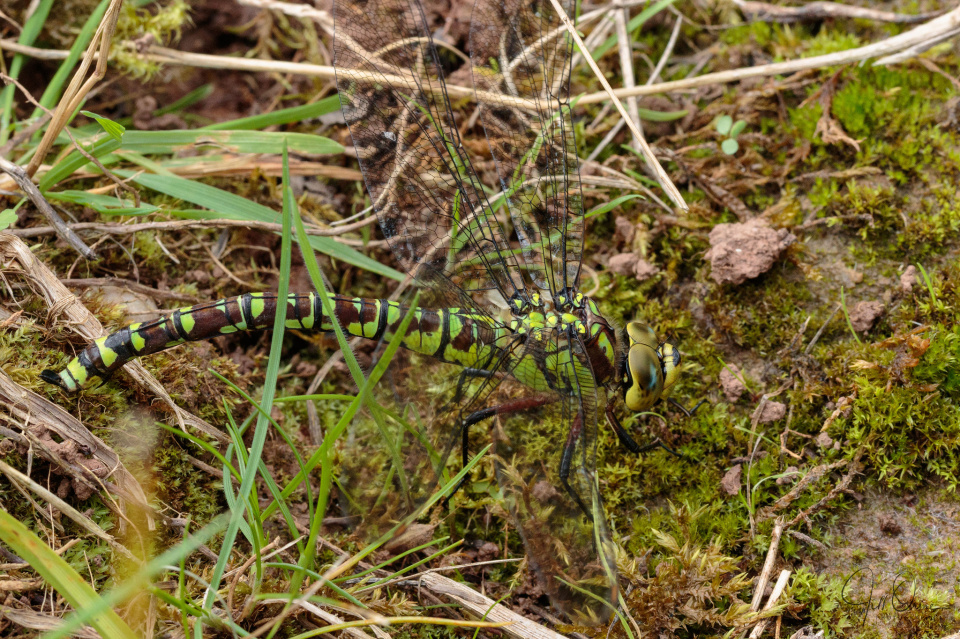 R and I did gardening this morning (eeeurgh), and then, as the sun had come out again, I took myself off to Grove Hill and spent another happy hour sitting by the small pond, watching the dragons and damsels playing.

Interestingly (to me, at least!), the dominant male Emperor appeared to be a different individual to yesterday, causing me to wonder if they operate a kind of shift system, as Southern Hawker males are said to do at a small area of water. After a while he disappeared, and as the weather was closing in again I started to think about making a move myself; but just then a movement caught my eye, and I realised that this female Southern Hawker had arrived to lay some eggs. As soon as she came down at the edge of the pond I lost sight of her, and although I approached the place where I’d last seen her slowly and cautiously, searching very carefully, I only found her again by stepping too close and putting her to flight.

I felt quite guilty – I don’t believe that my right to a photograph trumps a wild creature’s right to live its life unmolested – but after a few seconds of zooming around the edge of the pond she came back to the same place and settled again. After I’d taken a few frames with the long lens I backed slowly away until I was out of her line of sight, and then scuttled off to where I’d left the other camera with the macro lens attached. Returning to the oviposition site via the same circuitous route, I then had to find her all over again, though this time she helped me by rustling her wings.

If you view this full-screen, you should be able to make out part of her curved, blade-like ovipositor, below the last couple of segments of her abdomen, being inserted into the moss. And if you’ve never seen the way one of these hawkers probes delicately with the end of her abdomen to find suitable (or sometimes unsuitable) ground in which to insert her eggs, I’ve posted a very short film to my Facebook page.