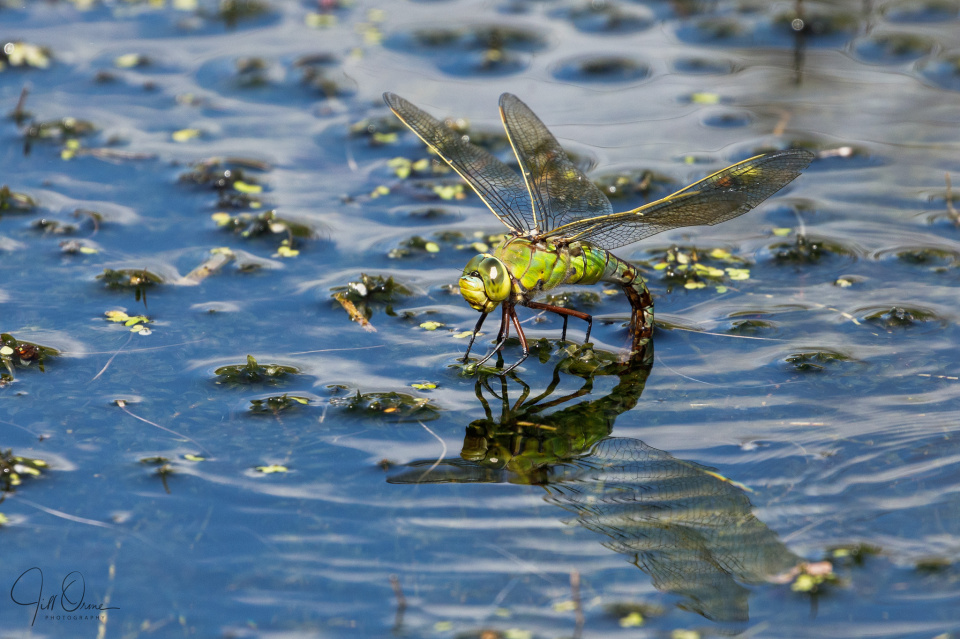 It was unexpectedly warm and bright today, which (of course) made me think about dragons, so I zoomed back over to Grove Hill to check out the ponds there, and had a thoroughly enjoyable afternoon.

Reinforcing my suspicion that Odonata don’t read the right books, the larger pond, which I noted yesterday as being potentially superb dragon territory, was very quiet; but the smaller one was absolutely teeming with damsels and dragons. It was mainly under the control of a single Emperor, who spent much of the afternoon defending the territory from incomers: a second male Emperor, a Brown Hawker, and a couple of Southern Hawkers were all seen off, and the hovering and ovipositing Common Darters were frequently chased as well, if they caught his attention. He left the two ovipositing female Emperors alone, but took exception to a female Southern Hawker, though by quiet persistence she did manage to place her eggs at the edge of the pond.

Although the male wasn’t bothering her, this female Emperor didn’t have entirely hassle-free session – my extra today shows her being buzzed by a male Small Red-eyed Damselfly. I’ve seen this behaviour quite often, and I still don’t understand it – given that she could eat much larger insects than him, it seems almost suicidal. I find myself wondering if damselflies might have an instinct to try to disrupt the laying of dragonfly eggs, given that some of them will develop into voracious nymphs that will prey on the damselflies’ own larvae. 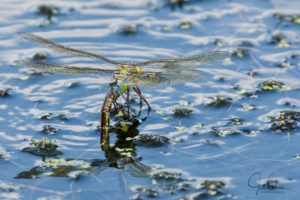 Unsurprisingly, the alpha male Emperor seemed to become increasingly tired over the course of the afternoon, needing to rest more and more frequently, and eventually he left the pond altogether and landed in the long grass a little distance away. I was looking for him to see if he’d chosen a photogenic spot (he hadn’t), when I was hailed by a man in the garden of the adjacent house, who asked what I was photographing. When I said dragonflies, he replied, “Why?” – not in any way aggressively, but because he couldn’t see why anyone would be interested in them – and though he listened politely while I explained my fascination with Odonata, it was fairly clear that I hadn’t made a convert. In the end I said, “Well, it keeps me out of mischief, anyway!”, and we both laughed and went our separate ways – but later on I realised that this wasn’t entirely true: arriving back at home I discovered that the large quantity of the mud I’d collected on jeans and boots had transferred itself around the driver’s compartment of the car, which now resembles a freshly ploughed field.