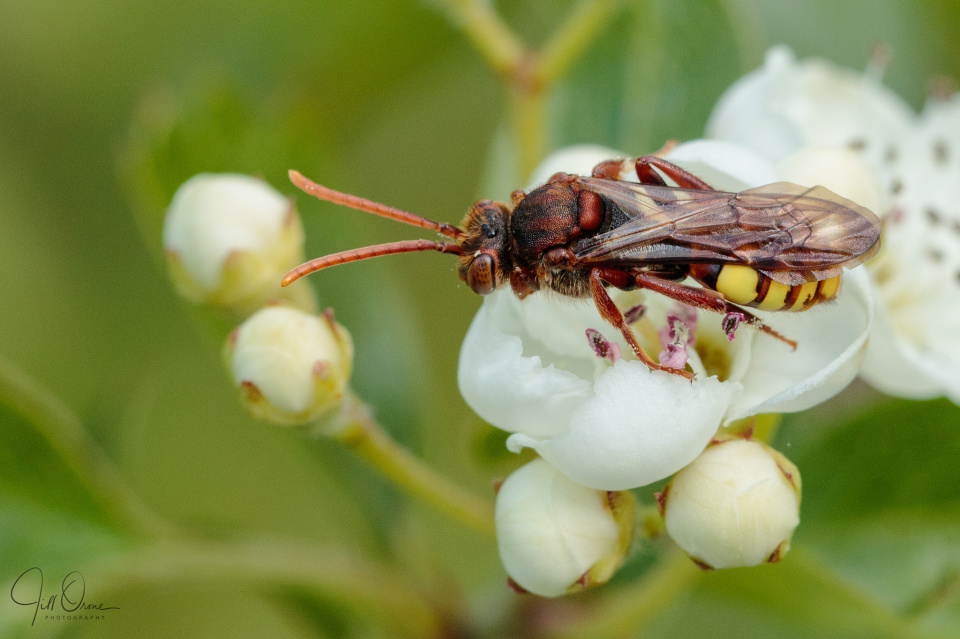 After another long morning of errands and wedding craziness, I went out for a head-clearing walk around the village. I was disappointed that my neighbours’ pond still had no Odonata, and the butterfly field no butterflies (nor any of the grasshoppers and crickets I’m hoping to find there soon), but I was utterly charmed to spot this Nomad bee, asleep on a half-opened hawthorn flower. It was so still that at first I was slightly worried it might actually have died, but then I saw the rhythmic movements of its abdomen that showed it was still breathing. The tri-colour Nomadas are very tricky to identify, but I was able to get in so close to it, and get such detailed photos, that I did hope that one of the admins of the BWARS group on Facebook would be able to offer me its species name – but no luck, sadly: it’s just a Nomad bee.

This was taken with my old macro lens, because I hadn’t paused to unpack the new one before rushing out in search of a postable photo; but when I arrived home I unwrapped my new toy and applied it to the 7DII, and then went for a garden rummage to try it out. Happily I’m not disappointed – it’s super-fast and super-sharp, and when the damsels and dragons do appear I think they’ll struggle to evade it! It had no difficult at all in latching on to a very tiny bee (only maybe half the length of the sleeping beauty on the hawthorn blossom), which I’ve been told is a Nomada flavoguttata – a first for my bee list.