You’re a gorgeous big fat chap! Oh! Chappess…. sorry! You are mahoosive though – who have you been eating? I hope it wasn’t my hawthorn shieldbug – it was round about here that I last saw it… No – sorry – I know – tasteless joke… Unlike the shieldbug, eh?!!

Look, I don’t mean to be a pest, but would you mind if I just moved this other leaf a little bit? Just so I can see – Oh. Right. You do mind. No – absolutely. Of course. I wouldn’t like it either. No, honestly – my bad. Look, you just carry on as you were, and ignore me, and I’ll just…. work around it. No, really – I’ll be fine.

Ummmm….. are you sure you haven’t seen that hawthorn shieldbug…?

You know that awkward moment when you’re chatting away to a tiny invertebrate, happy in the knowledge that there are no other humans within earshot, and then someone coughs on the other side of the hedge…? No? Just me then. Luckily, everyone around here already knows I’m barking.

The harvest(wo)man is a female Opilio Canestrinii, and her body is around 8mm long. I’ll leave you to do your own calculation on the length of her ridiculous legs, but I thought they merited a letterbox crop. I never did find the hawthorn shieldbug, but if you take a look at the extra you’ll see that there is someone sheltering on the underside of the her leaf – from the size and colouring, I think it’s a parent bug (Elasmucha grisea). Luckily I didn’t spot it until I was processing – if I’d seen it at the time, I’d probably have strained something, trying to get a more descriptive photo without upsetting my new friend. 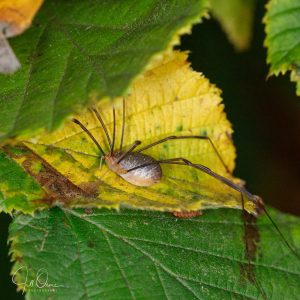 Opilio canestrinii was first recorded on the outskirts of London in 1999 and has since spread very rapidly across England and South Wales. In fact, it’s only been recorded in continental Europe over the last sixty years or so, and its origins seem to be a bit of a mystery. It’s regarded with some alarm and disfavour by arachnid experts, because it’s said to crowd out native species as it spreads. Adults of both species have been recorded into November, and females like this one are sometimes found right through the winter and into early spring, having laid their eggs during the previous autumn. Beyond this, not much seems to be known about the ecology of this species – including what it prefers to eat.

The arachnids that are commonly called harvestmen (or sometimes daddy-long-legs – though not around here, because R and I both grew up applying that name to crane flies) are more properly called Opiliones. This has been bothering me slightly, because opilio is the Latin word for shepherd, and apart from the obvious farming link I couldn’t connect shepherding and harvesting, or see any other reason for these solitary creatures to be given such a name. When I finally stirred myself and looked for an etymology, Wikipedia informed me that “[h]arvestmen are also referred to as “shepherd spiders” in reference to how their unusually long legs reminded observers of the ways that some European shepherds used stilts to better observe their wandering flocks from a distance.” Which, I have to say, sounds like a load of old b…aloney.