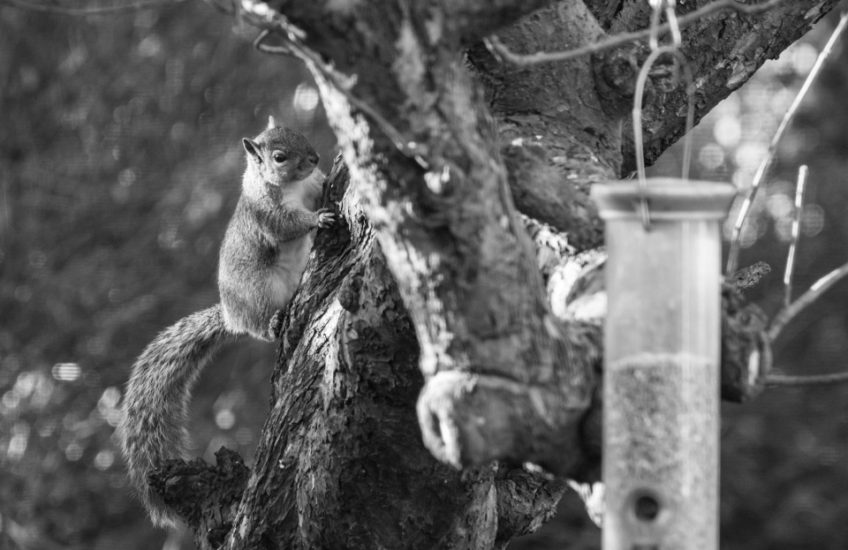 Fat balls or seed? Both, I think. Yes, definitely both – now, which first?

The extra: Who ate all the pies? Why, you did, my dear – judging by the incriminatory evidence all round your face. 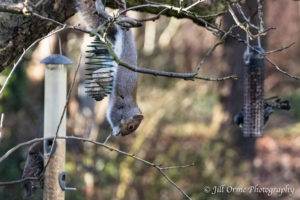 Apologies for the lack of clarity and weird bokeh in both these images – they were both taken through the conservatory window, and from quite a distance back so as not to scare off my victim.

I’m indebted to the garden squirrels for providing me with a set of emergency photos, on a day which I largely spent battling technology and losing. I was trying to install a pen tablet on the Mac to give me greater editing precision, but the installation tripped over the hurdle of the Mac deciding that the device was some strange unnamed intruder, and preventing it from communicating properly with its driver. In the end I did get it working, after a fashion, but with limited and unpredictable functionality; and the first thing it did on being tested was to break Lightroom in a way I’ve never seen Lightroom broken before.

I’m now waiting to hear back from the manufacturers, but if they can’t walk me through a sensible fix I fear that the tablet will have to be returned as not fit for purpose. This makes me very grumpy, partly because I put a lot of time into researching these devices before choosing this one, which added to the time I’ve spent today amounts to a significant spillage of irrecoverable lifespan, and partly because I’m really quite tech-savvy and don’t expect to be defeated by technology. On the other hand, the relief I experienced when I unplugged the thing and removed it to the other side of the room suggests to me that it may be better out of my life.

I did get out of the house for an hour this afternoon, zooming off to Evesham in search of the Waxwing of Four Pools. But, as predicted yesterday, Waxwing was there none – nor any disconsolate lurking togs to suggest that its arrival was in any way likely or looked for. The rowans and cotoneaster bushes around the car park of Majestic Wines are still full of berries, but the Waxwing appears to have moved on. On the plus side, I scored a case of Montepulciano d’Abruzzo, so it wasn’t a completely wasted trip.