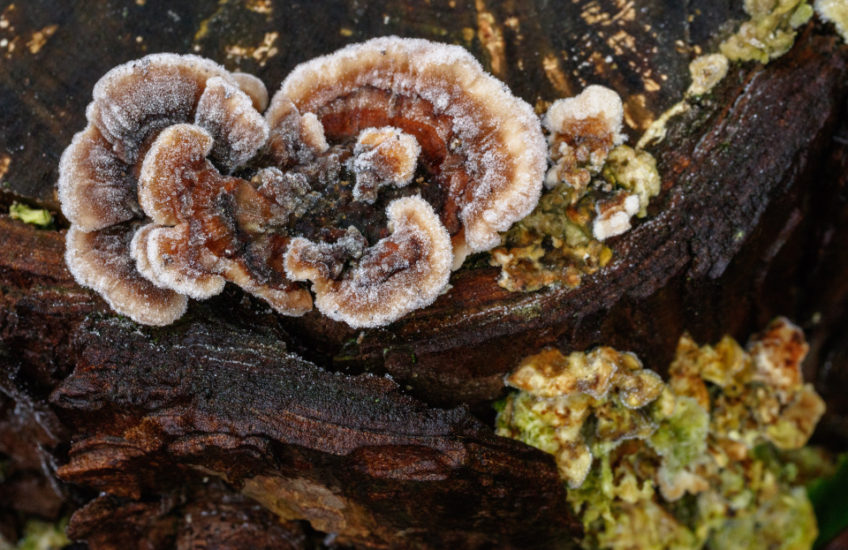 I’m bluffing actually – I know virtually nothing about fungi, so this is a guess based on all of five minutes of research on the web; but I hope that I’m right in plumping for Trametes versicolor, commonly called the Turkey tail fungus. If anyone knows otherwise, I’m more than happy to be corrected. It’s growing on the rotting stump of a conifer.

This morning dawned cold and frosty, but by the time I’d moved into second gear and applied the macro lens to the 7D the frost was beginning to thaw – so I chugged rapidly round the garden and took a couple of dozen shots before it disappeared altogether. Happily most of them were quite nice – the first I’ve taken with this camera that I’ve thought were OK – so I was a little spoiled for choice this evening. Which after yesterday was a relief, to be honest, and just goes to show how crucial the quality of the lens is to getting a decent image.

This afternoon I had an appointment in Stow-on-the-Wold, and I’m indebted to the nature photographer Ashley Grove for warning me on Facebook this morning that the town has been full of birders for the past week, owing to the presence of a very rare (for the UK) Blue Rock Thrush. As Stow is hell on a stick at the best of times this news didn’t make my day, but having been forewarned I left home half an hour early, and was lucky enough to find a parking space pretty easily. With twenty minutes still to spare, I wandered casually round to the birding site (a small residential close just out of the centre of the village), but all I found were half a dozen hardy birders standing chatting over their scopes and cameras – the Blue Rock Thrush was said to have been spotted a couple of hours previously, but was now nowhere to be seen. If it had any sense at all it was sitting in one of the local tea rooms with a large latte and some cake: it was dankly perishing outside.

Having failed in my wholly lacklustre attempt at photographing this rare migrant (don’t start!), I’ll just point you at one of Ashley’s images so you can see what I missed. Tomorrow I’m also hoping to miss the opportunity to photograph a Waxwing, which has been seen hanging around outside Majestic Wine in Evesham for the past few days.