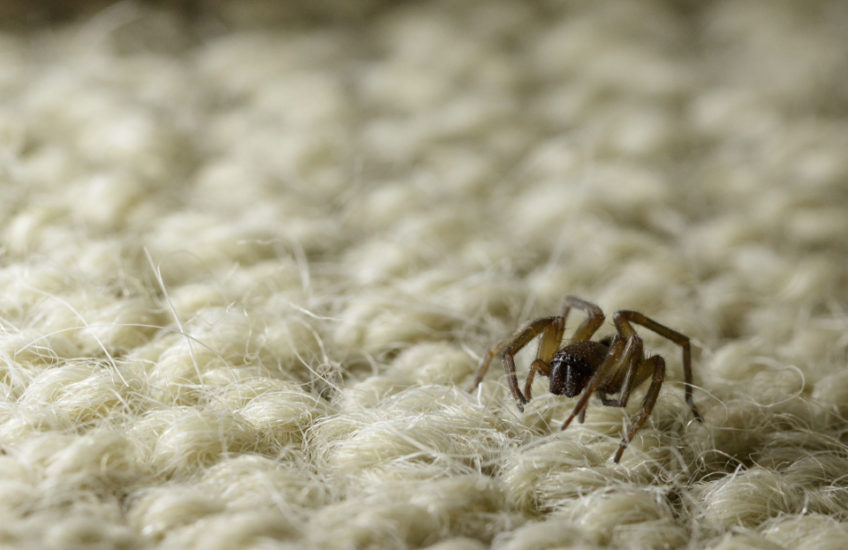 Is what this tiny spider – maybe 6mm across – was clearly thinking about me.

We had visitors yesterday – R’s cousin M and his wife A came to spend the day with us, and stayed overnight. This morning we all went for an enjoyable (if chilly) mooch around Chipping Campden and a little smackerel of something at the Campden Coffee Company, and then they departed for lunch with friends at Beckford before driving home to Wales, and R and I came home to straighten up the house before getting on with our normal stuff.

I was walking across the landing with an armful of sheets and towels, heading for the utility room, when I realised that what I was about to stand on was not a bit of fluff on the carpet, but a live spider. Abandoning all thought of chores I fetched the camera, grabbed the battery lantern we keep on the landing in case of power cuts, prostrated myself on the carpet (sisal, as you can see), and spent the next five minutes terrifying the poor creature. It hated having a light so close to it, but couldn’t work out how to get away from the lantern or from me; for a few seconds it tried being very fierce and waving its front legs at me threateningly, but when that didn’t work it simply froze and played dead.

After taking enough shots to be reasonably sure that I had one with focus on its eyes I turned off the lantern, picked up the laundry and proceeded on my way. Heading back towards my study several minutes later, I was mortified to find that the poor spider was still frozen with fear exactly where I’d left it. I gently nudged it with a finger nail, and it came to life and scuttled off towards the nearest piece of furniture – underneath which I suspect it may still be lying with a damp flannel on its forehead, having a fit of the vapours.

When R first saw this image, his first comment was, “Grotesque.” The fact that he later made it his pick of the day tells you all you need to know about his opinion of my other shots today….

If you can bear it, please do look full-screen.