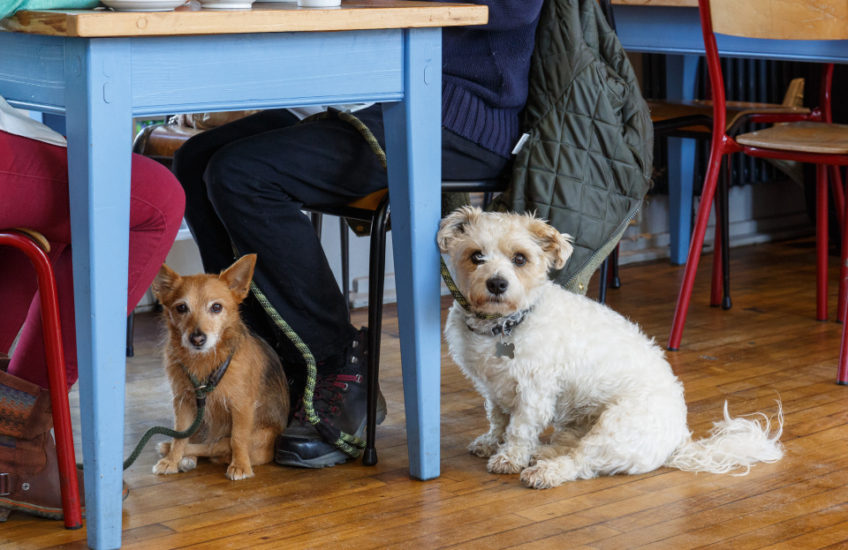 This is another photo in my occasional series Dogs of Boston Tea Party.

R and I decided to go out for breakfast this morning – because, you know, laziness – and as soon as we sat down I became aware that I was being fixed with a Very Intent Stare. This continued right through breakfast, after which, as I was coming back from ordering some more coffee, I went over to have a chat and bestow some fuss. There were four dogs under this table, but only the Bichon Frisé/terrier cross (whose name, I think, was Alfie – though that may just be because to me he looks like an Alfie) really wanted to make friends. When I commented on how intently he’d been gazing at me, one of the women said “Do you have sausages?”

“I’m sorry,” I said to (possibly) Alfie, “I did have sausages, but I’ve eaten them all.” I swear to you, his little face fell, and from then on the Very Intent Stare was distinctly tinged with Incredulity and Disappointment.

Leaving town at 10.30am, we arrived at Stratford Garden Centre five minutes after it opened – only to find the car park already virtually full. And there was I thinking I was the only person wanting to take advantage of another fine day! I spent virtually all of the rest of the day planting, and I’m now toadally zorsted – but reasonably smug about the improvement in at least some bits of the garden.