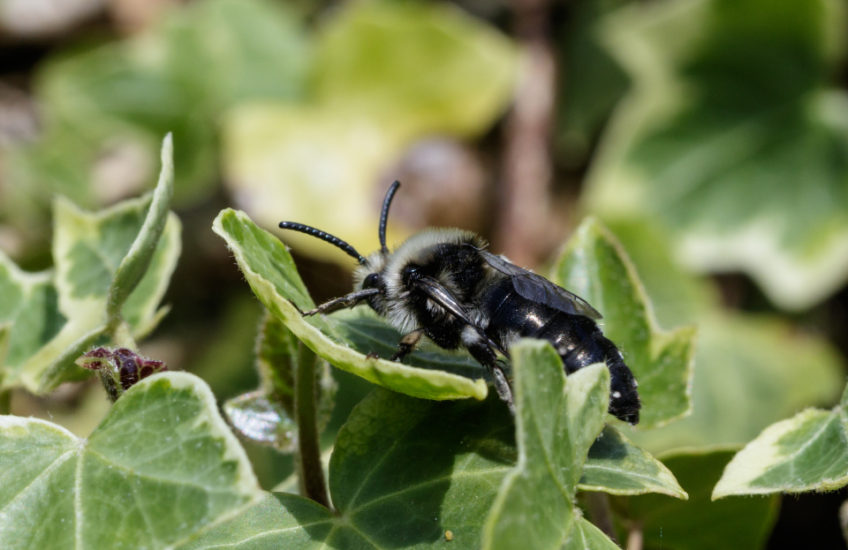 R woke me with a cup of tea early this morning, because I’d said that I might go into Stratford to photograph the annual Shakespeare birthday parade. In the end, the thought of traffic and crowds was just too off-putting, so instead I took advantage of my early start and zoomed off to the garden centre before it got busy. I’d deliberately gone in the MX-5 to make sure I didn’t over-purchase, but… well, suffice it to say that we zoomed back home again looking like a mobile greenhouse. Consequently I spent much of the rest of the day in the garden, planting my purchases, apart from another outing at lunch time when I ran out of potting compost and needed to replenish.

By the time I went hunting for bugs and photos, quite late in the afternoon, I was pretty tired and my camera work wasn’t up to much – most of my shots were only good for records. But R has picked out this image of Melecta albifrons, which he liked because he said it put him in mind of a villain from Game of Thrones or some such fantasy, skulking around wearing a furry cloak. It’s a pretty apt comparison actually: this ivy sits atop the yard wall like a thatch, and shades the nest entrances of a number of solitary bees; and the cleptoparasites which prey on the nests of those bees were lurking about on the ivy in droves this afternoon. This M. albifrons is a male, and was stalking a female while she tried to hunt down an Anthophora plumipes nest.

Arachnophobes should definitely not look at today’s extra photo, which is a cellar spider carrying a ball of her eggs. R found her in his study this morning and brought to me trapped under a glass, to find out if I thought she was interesting – which I certainly did. As soon as I’d photographed her he set her free in the tower, where I trust she was able to find a safe, dark corner for her babies. 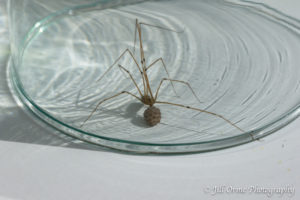