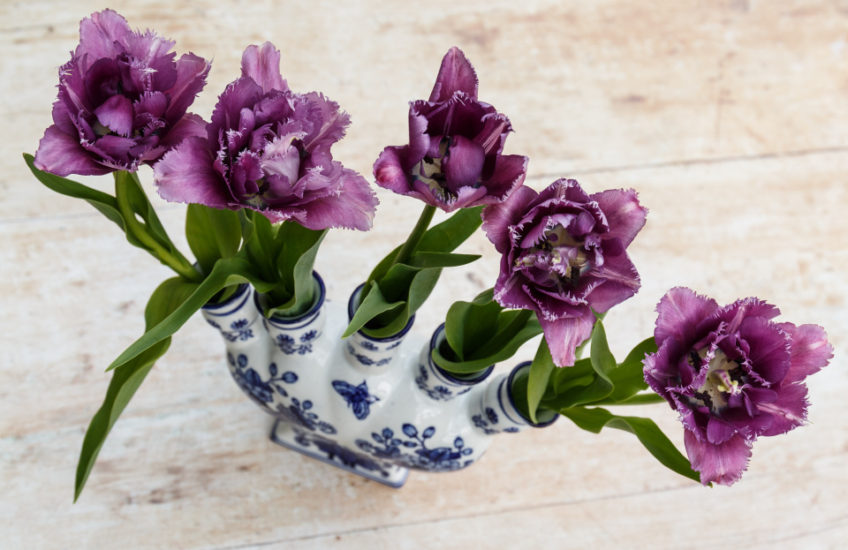 When we were in town a few days ago R asked if I needed more tulips, as the previous ones were well past their best. He has become very fond of the tulip vase, which is surprising given his previous distaste for ceramics – but I must say, it does look very pretty on the snug window-sill with fresh blooms in it. When we arrived at Waitrose we had a gentle Domestic over the choice of flowers: he thought that these, which hadn’t yet opened, looked “a bit ratty”, but I knew that they were parrot tulips and thought they’d be interesting when they opened, so I stood firm and bought them.

It’s amusing and pleasing to me that after all the years we spent haring around on different circuits – he working long hours, often away and frequently abroad, and I running hither and yon between kids and elders, we now frequently find ourselves pottering around town together, eating cake and debating amicably about things such as the purchase of flowers. It’s proving to be a surprisingly enjoyable stage of life.

Anyway, I’m happy to tell you that now the parrots have opened and are showing their proper colour and their rather mad frilliness, R approves my choice. A couple of days ago I had the idea of shooting them from this angle with a widish lens, but I was worried that they might have gone over by today; luckily they’ve survived, and I managed to catch them this morning in just about the only kind light we had all day.

I then braved the outdoors and weeded the corner bed I created in the back garden a couple of years ago, which was pretty hard work because it’s still heavily infested with couch grass. I planted a helenium there last summer, whose new growth is currently being absolutely trashed by snails and/or slugs; I’ve previously tried nematodes and garlic spray against the little beasts with no success, and I hate using metaldehyde (or any poison, in fact), so today after clearing the soil I surrounded the plant with a copper ring, which will theoretically give them a kind of shock if they try to cross it. I’m optimistic that this may save the helenium’s life – but then, I was optimistic about the garlic spray and the nematodes, and they were useless. If my optimism is rewarded this time and the copper works I may even be able to grow lupins, which I love but which have always been munched off at ground level within hours of being planted in this garden. If it doesn’t, the only other possible solutions I can think of are:
1. a beer trap (effective, but repulsive); or
2. an industrial quantity of concrete.