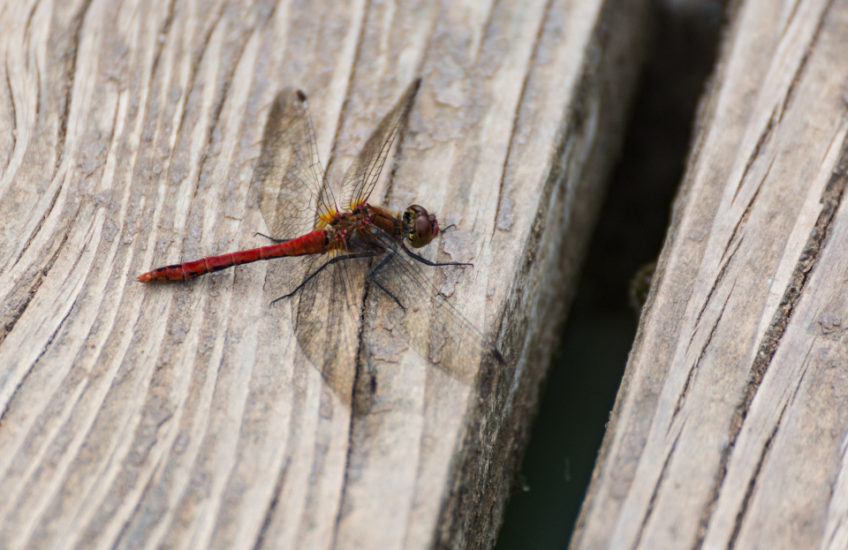 Sorry…? No – that’s actually his name – or more properly, Sympetrum sanguineum. I certainly didn’t swear at him, because he was one of just two Odonata I managed to find today. Sadly he was resting on a bridge, and just after I took this photo someone walked over it, so he removed himself to some reeds forthwith.

I had been supposed to be going to a blipmeet down in Bedfordshire today. But after a bad night I struggled to get myself moving this morning, and as the Swiss Garden is a two hour drive from here I found my projected arrival time progressing from rather late through extremely late to really, actually too late – so in the end I made my apologies to Nicoiseannie and stayed at home.

As I was pretty grumpy by now, I thought I might as well go for broke and try to sort out our new Vodafone SureSignal. If you know what that is, I would imagine that you’re already grinding your teeth in sympathy, but if you don’t, it’s a device that boosts your mobile phone signal, if you happen to live in a coverage black spot, by plugging into your broadband router and eating a significant amount of your bandwidth. We’ve had one of these devices for a few years, but it’s never been wonderful, and recently it has overheated and failed on several occasions – an annoyance to me, but potentially disastrous for R, who needs to be contactable for work. So we bought a new one, and yesterday I attempted to register it – firstly by going to the relevant page of the Vodafone web site, which was unavailable; and then by dealing with a Vodafone employee via live chat. If I tell you that I was actually shedding tears of frustration at one point during the live chat, and had to restrain myself from typing my responses in capital letters, you can probably imagine how well the whole thing went. Even R, who assumes (not unreasonably) that I exaggerate most stories for comic effect, used the word “unbelievable” when he read the chat transcript which was emailed to me after the close of the session. It was therefore no great surprise to either of us that by this morning I had not received the promised communication from Vodafone to say that the new device was working.

So today I tried a different approach, and phoned them. It took me a mere three attempts at guessing the correct responses to the various stages of the routing menu to get through to a human being who appeared to know what he was talking about, and who assured me that this time the SureSignal was registered, and that it should be working in somewhere between half an hour and four hours. Or just possibly twelve hours. But whenever it was, he said, I would be sent both an email and a text – and I’d be able to to receive the text because my mobile would be working.

I decided not to hold my breath. Instead, I thought I’d pop down to Croome, which is my current favourite out-and-about place, to look for some dragons. The last time I was there the place was heaving with them, but today, though I set off in bright sunshine, by the time I arrived it was overcast and there were virtually none to be seen. The visit was far from a waste of my afternoon though: I ate some excellent cake; explored the church, which is a glorious combination of cool, elegant Adam interior and riotously camp funerary monuments; and had an very nice and quite unexpected mini-blipmeet by this same bridge with CoffeePotter, Nikonabike, Hector and Ziggy, who were there for the purpose of wearing out grandchildren. So it was a nice afternoon – and I can go back and look for dragons again next week, if the heatwave we’ve been promised materialises.

The SureSignal still isn’t working, by the way. I phoned Vodafone again when I got home, and was told – oh, I don’t know…. the moon’s in Venus or something, or maybe it’s because there’s a ‘y’ in the day. Or it’s down to Brexit, maybe. Something, anyway – to be honest, I was humming a little song and not actually listening: whatever they were saying was just noise. But the current assertion is that it’ll start working tomorrow. Have I mentioned that I think Vodafone are the pits? Feel free to quote me.