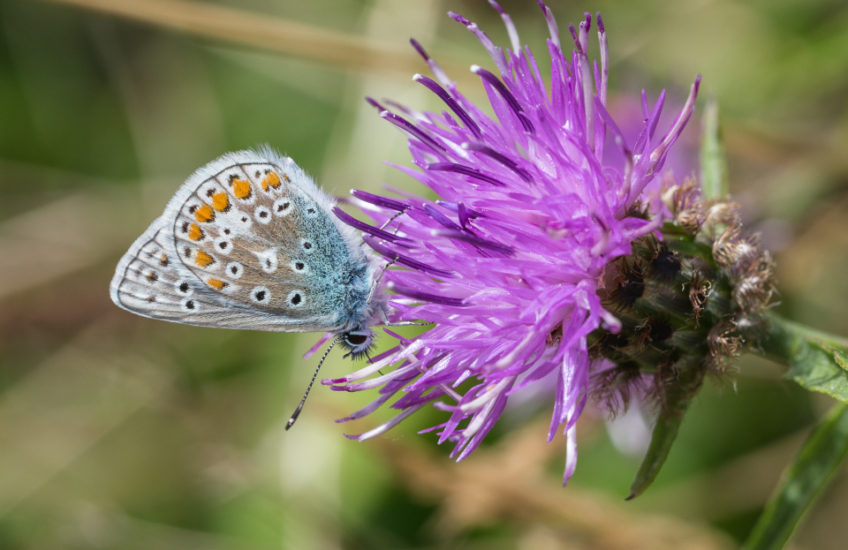 Polyommatus icarus proceeded almost unchallenged into the second round of the 30mm Wingspan Freestyle Nectaring competition at the AOG this morning, the only other competitor in this size class being a single rather battered Essex Skipper. P. icarus did lose some style points by thrusting his head so far into the knapweed at one point that his tongue became invisible to the judges, but they were especially impressed by the Full Inversion you see here, and commented favourably on his body line and extremely attractive furriness during the compulsory Inline Photographer Foxing Manoeuvre. His coach will no doubt remind him before the next round that nectar is there for purposes of the display, and not actually to be eaten! He is looking very strong, and may well take the gold in this class – especially if no other Common Blues emerge before next week. 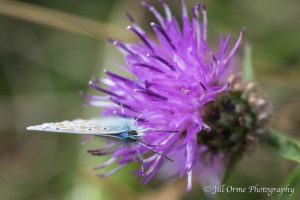 I hope you’re impressed that I managed to find a single butterfly, whose folded wings are about the size of my fingernail, in an acre of meadow this morning? They don’t call me the Butterfly Whisperer for nothing.

Actually, they don’t call me that at all – the truth is that butterflies are quite territorial, so I simply headed back for the place where I’d seen him yesterday, and there he was – but nectaring on knapweed this time. He needs to do a lot of that to keep up his strength, because by the time the females emerge he’s certain to have younger and fresher rivals for their attention. Which is why, when he left the knapweed and went to bask on some dry grass, and then took to the air in horror when I crashed after him through a stand of thistles and some bramble, I gave up the pursuit and left him to it. Ow.

The first extra is his stylish execution of the Inline Photographer Foxing Manoeuvre; and the second – to show you his fabulous colouring – is one of the shots I got of him at rest yesterday. 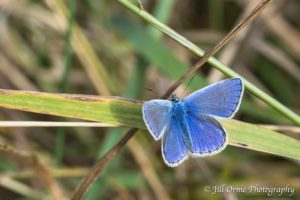 Only the males have this clear monochrome blue on the upper wing; females are much browner on both under and upper surfaces, though the upper sides of their wings are dusted with variable amounts of blue and also have orange spots at the margins. They’re quite different but also beautiful, and I hope I’ll get the chance to bring you one in due course, when they emerge.