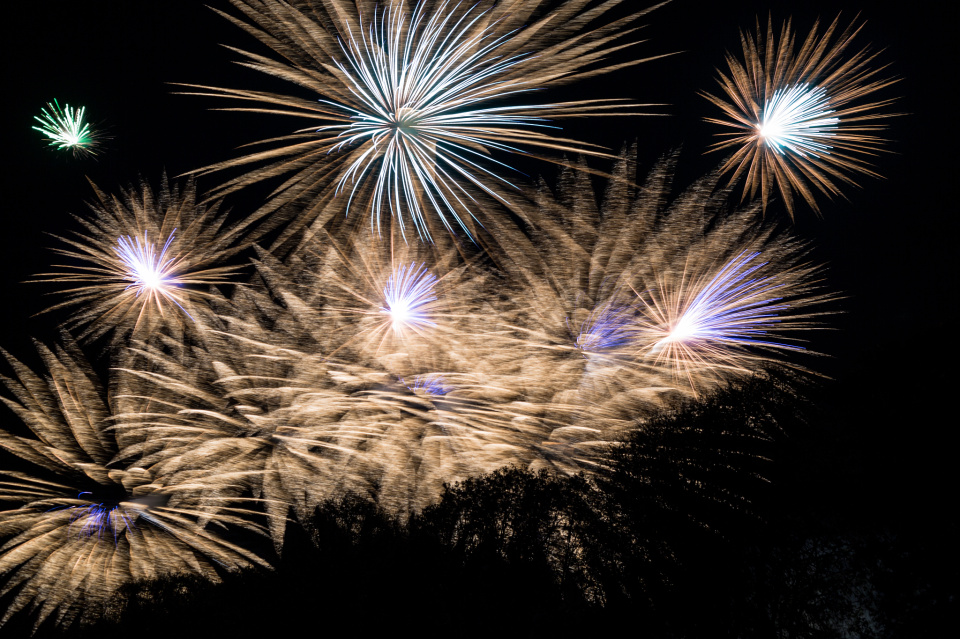 Tonight I made my first attempt to photograph fireworks: I had thought I might be able to find a good vantage point from which to snap the Evesham town display without dragging a tripod through a muddy field with several hundred other people in it, but they’re crafty down in the Sham, and they hold their bonfire in a meadow which is essentially surrounded by trees. But though most of the display was out of my view up on the Corporation Bridge, there were some higher explosions that I did manage to catch – including the big finale, of which this is part. The main thing I learned from tonight’s experience was this: it’s all very well making a mental list of the equipment you need, but if you don’t check it properly before leaving the house you may well remember half way there that you didn’t bring the cable release, in which case you’re going to have to put the shutter on a 2-second timer and just guess when to press it, which will make your life harder than it needs to be.

*Face palm, with eyes rolling to the ceiling*

Next, can I say a big thank you to everyone who expressed concern and sent good wishes for Roley, who went for endoscopy and x-rays this morning. When I picked him up this afternoon I had a long chat with the vet and established that there are two largely unconnected things going on.

The essential problem is that he has pneumonia, but highly localised to one lobe of one lung. What isn’t clear is what’s causing it: the worst case would be a tumour, though apparently such a local presentation would be rare; or it might be due to an inhaled foreign body; or it might be lungworm. Ian, the vet, collected some blood and other matter from the entrance to the lobe, which has been sent for analysis, and we will have to wait to hear what the pathologist says. For now Roley is on two different types of antibiotic and a lungworm treatment, but depending on the underlying pathology he might need a longer course of drugs, or even removal of the lobe.

The other issue he has is that he suffers from tracheal collapse, which we didn’t know before, but which explains the fact that his breathing has become steadily noisier over the years. Dogs with tracheal collapse apparently cough more readily, and worse, and for longer than those which don’t suffer from the condition, which might well have worked in Roley’s favour this time – Ian was inclined to think that it has allowed for an early diagnosis of the pneumonia.

Roley is highly unimpressed with the attention his cough has received, and clearly feels that the events of today were some kind of byzantine punishment dreamed up by She Who Hates Jack Russell Terriers. This despite the two lightly scrambled eggs I gave him when we arrived home. The other thing that has just gone wrong with his life is that I’ve decided to walk him in a harness rather than a collar and lead, to try to avoid putting stress on his throat; and even though I got R to use his engineering skills to fit the harness on him Roley was well aware who was responsible for this extra torture, and I received the Death Stare while R got cuddles.