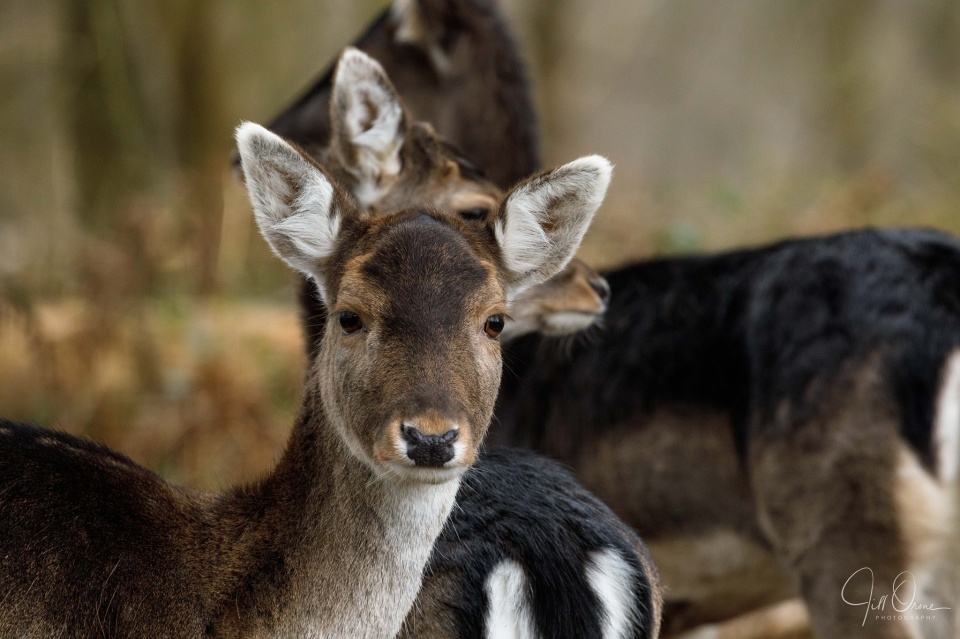 I didn’t have much time to spare today, and anyway it was still far too windy for owls, so I zoomed off to my go-to place for reasonably reliable wildlife photos, and spent a very chilly hour in the hide. After which I needed coffee and…. oh. I see you’re well ahead of me here.

Anyway, the session was a swings and roundabouts one. On the minus side, being a nicer person than I generally paint myself, I temporarily gave up my place on the viewing bench to some elderly people (by which I mean, of course, a few years older than me), and tucked myself into a corner from which I had no view of the treecreeper that then made a single foray up the trunk of a nearby pine tree. Someone else asked me afterwards if I’d seen it, but given that I hadn’t, and therefore can’t list it, frankly I wish they hadn’t bothered telling me about it at all.

On the up side, these three unusually dark fallow deer came into the clearing, which I wasn’t expecting because I haven’t seen any deer at Dunnington since before Christmas. They weren’t happy that there were people in the hide, and only stayed long enough to grab a little food before retreating into the wood, so this was one of just three photos I took of them. The other two are far more normal shots of a single fawn, but I’m posting this one because it amuses me. I think there should be a word to describe the situation in which a group of animals stack themselves up in a receding line like an arty album cover, but I fear there isn’t.

The other thing this trio puts me in mind of is a dance troupe, caught mid-manoeuvre. In trying to find if there’s a name for the oriental dance in which several performers stand behind each other to give the illusion of a multi-armed deity, I happened across an amazing dance sequence from the old Hollywood film Kismet. It’s not the thing I was looking for at all, but I like it so much that I’ve now watched it several times, which is particularly surprising because I don’t like musicals. It’s called Not Since Nineveh, and I got the link from an interesting blog about the choreographer Jack Cole.

This evening I joined a second choir, which was really good fun, if rather scary. It’s several years since I sang the Brahms Requiem, and I’ve just learned that I don’t remember it as well as I thought I did!