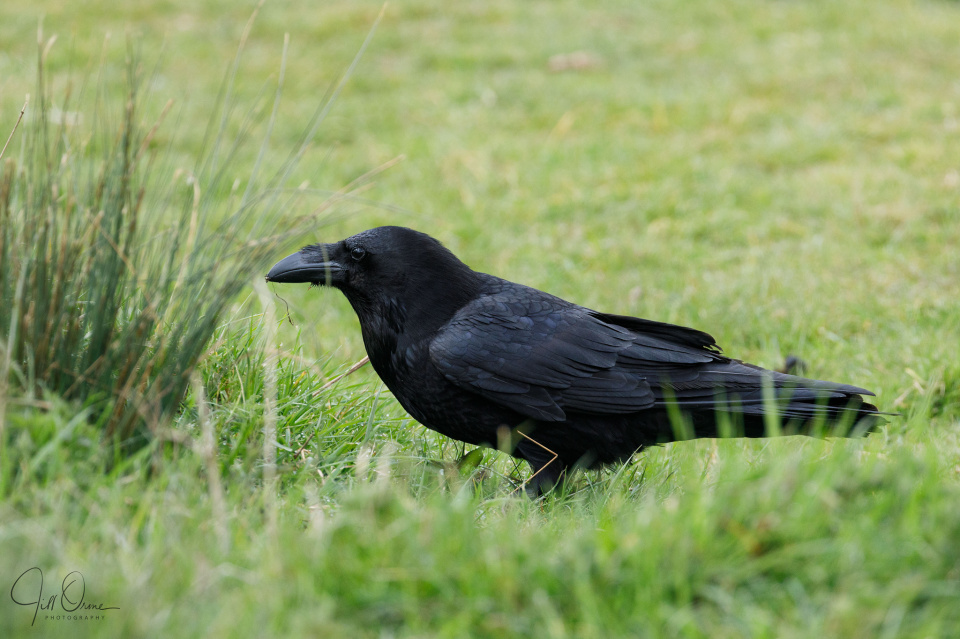 After I put this photo up in a bird forum to check that I wasn’t deluding myself about the identification, my notifications went wild: birders, it seems, love a raven. I’m fairly keen on them myself, though if I had to choose my favourite corvid it would probably be the rook. R says they’re ugly, which is enough provocation to set off a domestic culture war, though I may decide to let it pass. This time.

Anyway, we met the raven at Charlecote, noodling around on the bank of the lake looking for food, and largely ignoring us, though it did seem determined not to allow me a clean shot. R was very amused to watch it repeatedly walk out into the open, only to step behind a tussock of grass or into a dip in the ground every single time I raised the camera. With most wild creatures you’d tell yourself not to take this personally because it was clearly coincidental, but with a raven you couldn’t be certain of that: they’re highly intelligent and playful, and are known to be both active problem-solvers and capable of deliberate deception.

Found right across the Northern Hemisphere, the raven is the biggest and heaviest of the corvids, at around two feet in length, with a four-foot wingspan, and weighing up to 2kg. They’re omnivorous, varying their diet according to locality and season – this one was clearly digging for invertebrates, but they also take carrion, and will eat fresh fruits and seeds. They will also take the eggs and young of other birds – I photographed one stealing a skylark egg up on the Cotswold scarp a couple of years ago – but because of their size they’re not seriously vulnerable to predation themselves.

Ravens favour mountainous and coastal regions, but in the UK they’ve been extending their range south and eastwards from their previous strongholds in Scotland, Wales, and the north of England, and are now beginning to appear in parks that have the tall trees they need for nesting. About a month ago another visitor at Charlecote asked us if we’d seen any ravens, and told us that some nested here during last spring’s lockdown. She was worried that the return of human traffic might have caused them to vacate the estate, but on today’s evidence I’d say that they’re made of sterner stuff than that.