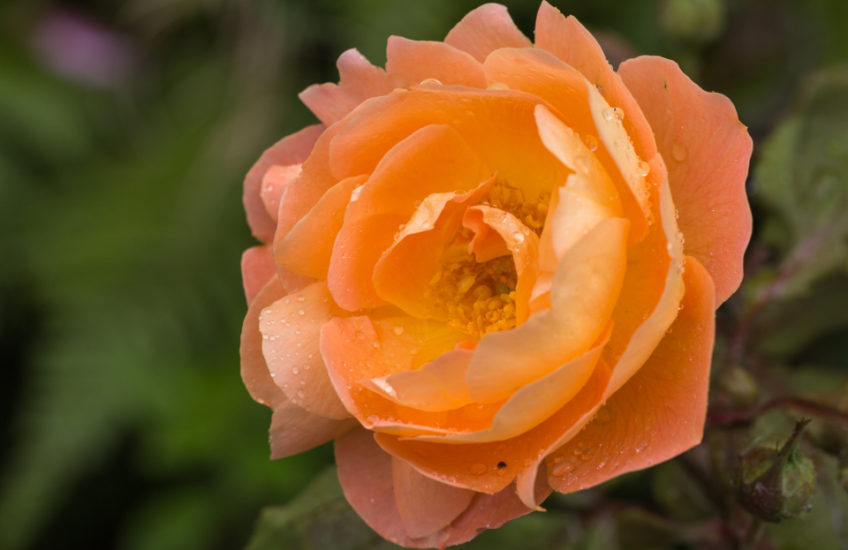 After a slow start this morning because my joints were grumbling, I finally got moving and set myself to weeding the corner border of the back garden, which I’d stupidly allowed to become overrun with rosebay willowherb. The beastly stuff not only seeds itself everywhere, but the roots are rhizomatous and very difficult to get rid of once they’ve established. Luckily we had a serious thunderstorm yesterday evening, so the ground was damp and I was able to clear half of the bed pretty quickly, digging out as much root as I could find with a weeding fork.

I’d filled a barrow with debris and was feeling pretty smug, when suddenly the sky darkened and it began to rain quite heavily. I’d left the camera on the patio table just in case I saw anything interesting while I was out, so I quickly grabbed it and rattled off a few shots of Lady Emma Hamilton, who has pride of place in that bed. This isn’t the first time I’ve blipped this rose, but I do think she’s worth revisiting: in my opinion she’s one of the prettiest of the David Austin roses, and as well as being a lovely colour smells absolutely glorious. She’s quite small – less than a metre in height and spread in my garden – and appropriately given her name she’s rather lax in habit, but given the right spot I think she’s well worth planting.  I designed this bed around her, underplanting her with heucheras and ferns, and featuring other taller plants such as a Phormium in toning colours. Sadly there have been a couple of losses since I last checked the border – a Salvia and a Heucherella have definitely disappeared, and I think at least one other plant has died; so if it’s fine tomorrow I may treat myself to a trip up to Cotswold Garden Flowers, to source some replacements.

The rain bucketed down for a while this afternoon, during which time R and I had lunch, but then it fined up again and I was able to get back out and finish weeding the bed. My hands and my back are now telling me that I’ve overdone things, so it’s quite possible that plant hunting is all I’ll be able to do tomorrow; but it’s a curse of my personality that I loathe unfinished business – to the point where I’d rather not start something at all than start it and have to leave it half-done – so it’s a relief as well as a satisfaction to have finished this particular task.