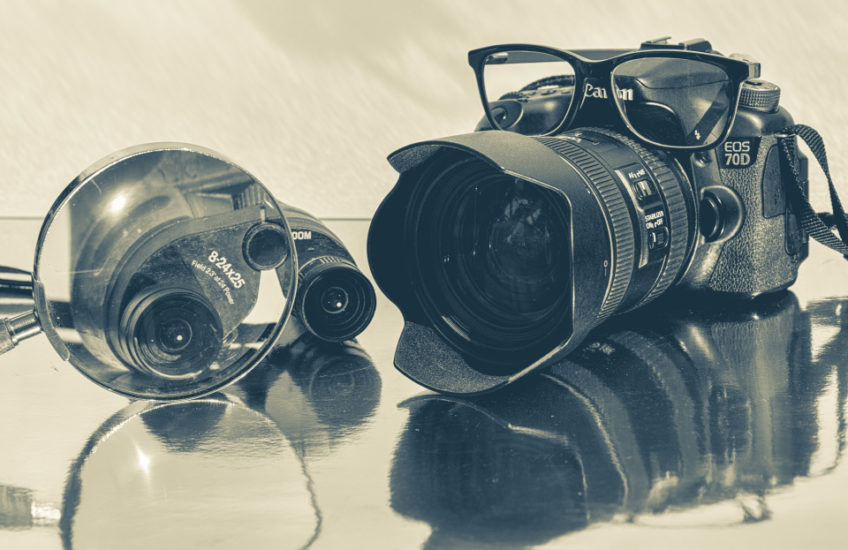 I’m posting early today (by my standards), because it occurred to me in the silent watches of last night that I hadn’t reminded you in yesterday’s blip that today is Mono Monday. I had thought of taking a photo of my own eye for today’s challenge – but really, none of us needs that level of discomfort. So I’ve resorted to a collection of the implements through which I view the world.

My journal is called The Way I See Things partly because it frequently consists of me ranting about stuff, but mainly because even when I don’t have a camera in my hand I’m generally looking around me for sights or views that I would photograph if I did have one, and mentally composing the shot. Some people might find this sad, but I think it makes me more observant than I used to be before the habit of recording things turned into a near-obsession. Unfortunately, if the thing I’m looking at is small I might not actually be able to see it properly if I have neither the camera nor a pair of reading glasses with me, because these days I’m quite long-sighted – but that’s a different issue.

On the subject of dodgy eyesight and cameras, I had a tiny Eureka! moment a couple of weeks ago, which I’ll share here because it might conceivably come in useful to someone. Because I’m long-sighted, what I see though an uncorrected camera viewfinder is not what the camera itself is seeing – which doesn’t matter of course, provided I’m relying on autofocus, but when doing macro work or photographing bugs in flight, for example, I tend to focus manually. Luckily, as most people probably know, there is a tiny wheel at the side of the viewfinder in a DSLR called the Diopter Wheel, which allows you to adjust the viewfinder to your own vision, and thus see things as the camera is seeing them.

So far, so obvious. But here’s the thing: I’ve always made the diopter correction as suggested in the manuals for my cameras, which is a faffy process involving setting the camera on a tripod and manually focusing on something such as a piece of newsprint; taking a photo; checking that the photo is sharp; if it’s not sharp going back and adjusting the Diopter Wheel; and rinsing and repeating until you get a well-focused image. It’s boring, and it can take a long time.

When the 5DIII came back from its stay in the camera hospital, all of its settings had been restored to factory defaults – including the diopter adjustment. I realised this fact while walking around Stratford snapping various things to test the camera, and I wound up sitting in a coffee shop dialling in my custom settings while eating cake. I should probably do this more often, because I think it was the sugar rush that gave me my mini brainwave. I’d thought I would have to leave the diopter adjustment until I got back home, but then suddenly realised while taking a photo of R that I couldn’t properly read the exposure settings projected into the viewfinder. And I thought I wonder if….?

And sure enough, turning the Diopter Wheel changed the sharpness of what I was reading in the viewfinder. It was still a bit of a faff because it’s virtually impossible to half-press the shutter button and bring up the settings, while looking through the viewfinder and simultaneously rotating a tiny wheel at the side of the eyepiece – but it still only took a few tweaks over maybe a minute to get the settings into sharp focus.

A few days later I was at Croome, photographing dragonflies with the 70D – which I’ve had for quite a while, and haven’t adjusted since just after I bought it – and as I was manually focusing I suddenly thought to look at the projected settings, and realised that they weren’t pin-sharp. So I used my new technique again and quickly corrected the viewfinder – and came home with the best set of dragon shots I’d ever managed to capture.

If none of this was news to you, or you have 20/20 vision, or you never use manual focus or a DSLR – please accept my apologies for rambling on. Although, if any of these apply to you, you probably stopped reading several paragraphs ago. But this little discovery saved me time, and more importantly improved my manual focus – and the best thing is how easy it is to check every now and then that the diopter adjustment is still correct. I certainly wish I’d worked it out sooner!