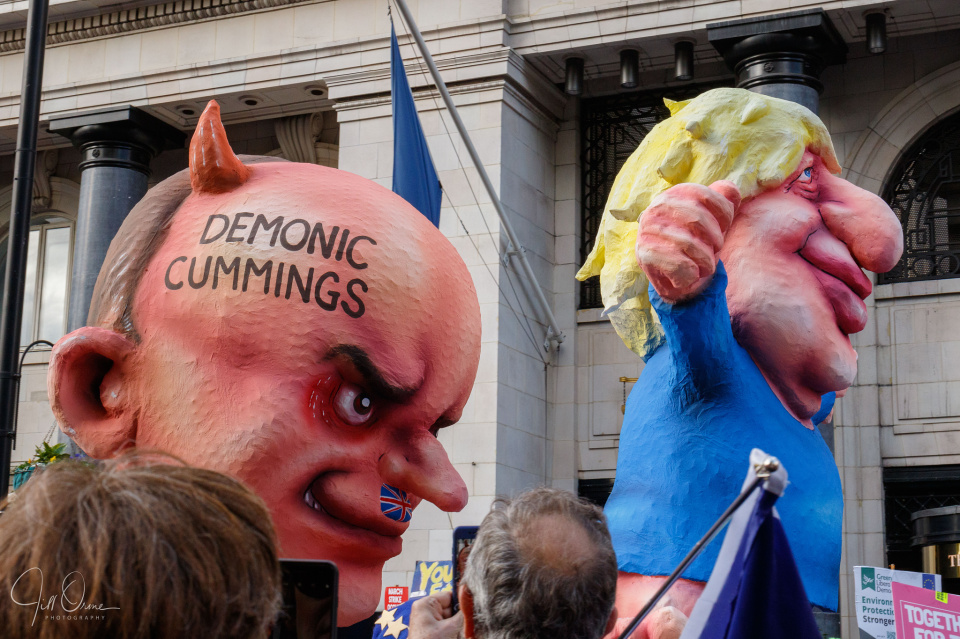 We started on Piccadilly this time, which meant that we were (relatively) close to the front and did actually get to walk, if not actually march, and we were a little concerned that it may not have been as big a turnout as the Million March seven months ago; but I’m now seeing reports that the back of the crowd didn’t make it to the start point until two and a half hours after we’d set off – so I guess it probably was. This float was allowed through the crowd, and passed us while we were still on Piccadilly – I’m giving it an A++ for effort, although on the negative side I suspect that D. Cummings will probably love it when he sees the press pics.

We were jammed into the lower end of Whitehall, within sight of the giant screens in Parliament Square, when they stopped showing speeches and went to a live feed from inside the House of Commons. The cheer that went up when the vote was called in favour of the Letwin amendment reverberated through my skeleton, and people were literally jumping up and down and hugging each other, as the rain poured down on us.

Sincere thanks go to the police for keeping us all safe; and especially to whoever realised that the crush on Whitehall might be getting out of hand. We were trying to push our way back out at that point, against an unstoppable tide of marchers still arriving, and happened to be in just the right spot when the gates through to Horse Guards were opened, and a pedestrian one-way system set up so that those leaving the march could get out via The Mall, leaving Whitehall for those still trying to get down to Parliament Square. Ten minutes later we were back in Trafalgar Square, in time to get a meal and some celebratory wine before heading back to Paddington for our train home.

We’re so tired we’ve almost lost the power of speech; but we’ll do it all again if we have to. If I have one regret it’s that we weren’t actually in the Square and able to be part of another effective Led by Donkeys stunt. I’d like to be able to say that I helped with that – but at least we can say, with hundreds of thousands of other people, that we came to London and made our voices heard.