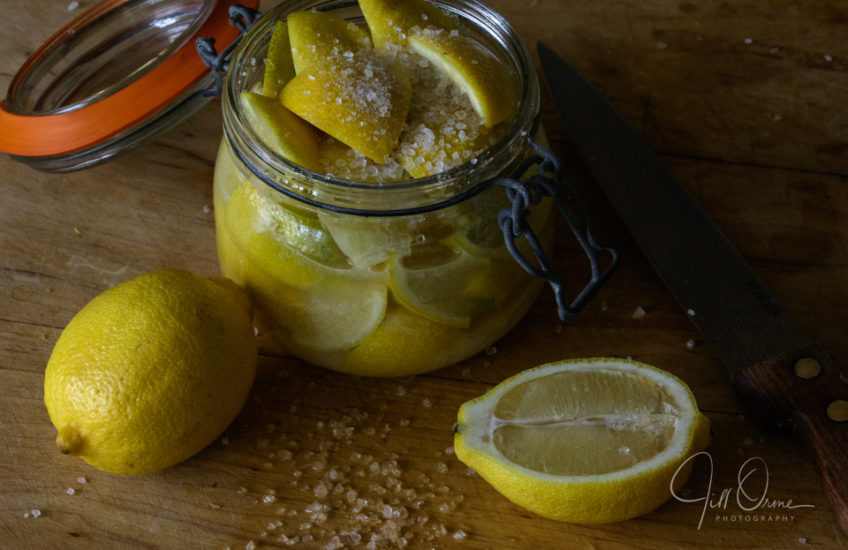 A few days ago I had a sudden yen to make a chicken tagine. Now, normally when I get the urge to do cooking, I simply go and do something more interesting until it recedes; but on this occasion the notion of a chicken tagine took hold and declined to let go. The problem with which was that in order to make a good chicken tagine you need a few things other than chicken, one of which is preserved lemons – and I didn’t have any. And while it’s probably possible to buy preserved lemons in supermarkets these days (remind me to regale you one day with the story of how I never set eyes on an avocado until I was about thirteen years old), I prefer to make my own.

So today the little Ocado van delivered (among other things, naturally: I’m not wholly profligate) some lemons and some coarse sea salt, and I started the three-week process of producing preserved lemons. It’s hardly a cordon bleu technique: you chop up the lemons to your preferred size and then simply squish them into a jar with a load of salt, packing them tightly enough to release juice and to get rid of any air pockets. I managed to cram four and a half lemons into a 500g jar, and I then squeezed the spare half and used the juice to make sure that my lemons were fully covered before sealing it. All I need to do over the next three weeks is to check the jar occasionally, to up-end it for a while if the salt seems to be sinking to the bottom, and possibly to add more juice if the level looks to be dropping. By the end of that time the lemons will have cured enough to be soft, and the juice will be thick with dissolved salt; I’ll then put the jar in the fridge, where the contents will keep for up to a year if necessary.

While you’re still dazed from the news that I do occasionally visit the kitchen for other reasons than making a mug of tea or pouring a glass of wine, let me tell you that I also bought sugar today, with the intention that tomorrow I will make gooseberry jam. I’m like an actual domestic goddess or something.

This afternoon’s final rehearsal for Dido and Aenaeas was such a shambles that normal order was restored to the universe, and the choir walked into the church this evening appropriately wired on adrenaline. As usual there were a few tricky moments during the performance, but overall it was terrific, and our very knowledgeable audience responded with great enthusiasm. Two young singers from local schools sang some of the minor female parts, and were both absolutely wonderful – so talented, and so confident in what could easily have been a daunting setting, that it reduced me almost to tears. And our Dido, the mezzo-soprano Tabitha Reynolds, sang the Lament so beautifully that I think everyone in the place would happily have paid her to go back to the beginning and sing it through again; R, who really doesn’t care for classical singing very much, said afterwards that her performance brought him out in goose bumps. The choir now goes on its summer break until September, when we’ll start working on Christmas music – by which time my pitching will have gone to hell in a handcart again.

Still, when you’re an actual domestic goddess, no-one expects that you should also be able to just open your mouth and pitch a G…. do they?