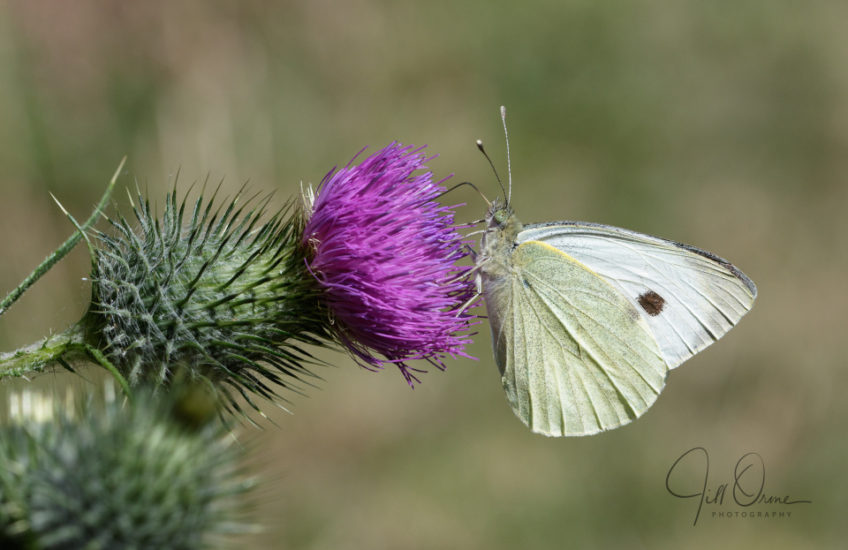 I went out this morning to the thistly verge, and as I’d hoped it was busy with leafcutter bees – as well as numerous other bees, hoverflies and butterflies. I did manage photos of several different species of bee, but I’m still waiting on formal identification from the BWARS people (who must be longing for a lie-down in a darkened room with a damp flannel on their collective forehead, I would think, given the frantic rate at which ID requests are currently being posted to their Facebook page).

So I’ll hold off on posting one of the leafcutters, and instead give you what in any case is my favourite photo from this morning’s set: a cabbage white butterfly breakfasting on thistle. Based on its size, and the shadow you can see of the dark mark on the tip of the upper surface of the forewing, which seems to be quite extensive, I think it’s a Large White – though in truth I’m not at all certain. I do know that someone’s brassicas are probably now in trouble, but as I don’t grow them myself I was able simply to enjoy this scene without getting in a tizz at the thought of eggs and larvae.

This evening’s rehearsal of Dido and Aeneas went dangerously well: at this stage in the proceedings we’re usually told that we’re in danger of letting down the organisation and ourselves, but tonight our director was worryingly calm, and even on occasion complimentary. I’m terribly afraid that we may have peaked too soon….