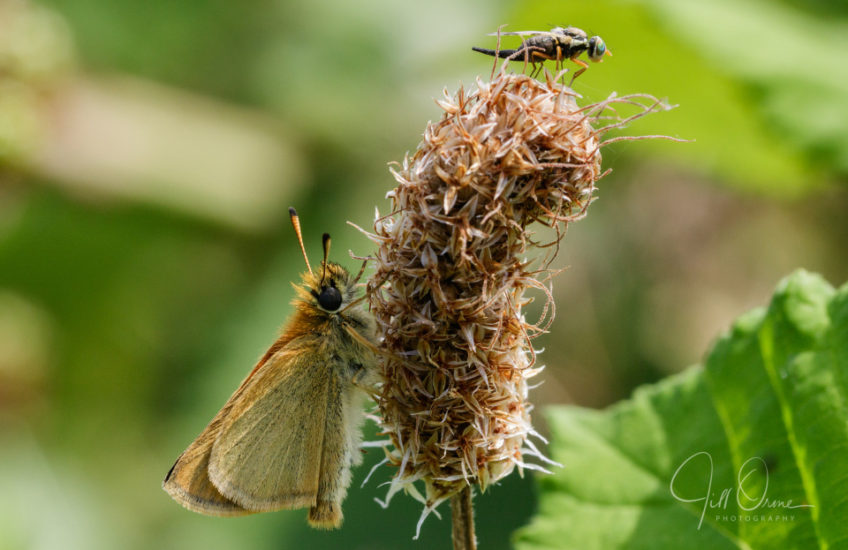 It was another blistering day, but I wanted a bug shot; so I slathered myself with sunscreen and set off for Tilly’s field, which is the nearest wild flower meadow to the house. But when I got to the gate I discovered that since my last visit, last week, it has been cut and gathered. I actually let out a noise of distress, thinking of all the insects, and their eggs and larvae, which will have been destroyed in this process; I know that domesticated herbivores need winter feed, but I couldn’t make myself think of this as anything other than a tiny ecological disaster.

Regrouping, I carried on to the butterfly field – which is never cut, because the man who owns it has been trying without success for a number of years to get permission to build on it, and in the meanwhile he leaves it to grow completely wild. Here I found Marbled Whites, Meadow Browns, Gatekeepers, Ringlets, Large, Small and Essex Skippers, a Brimstone and a Small Tortoiseshell; as well as squadrons of bees, several grasshoppers, numerous Common Cardinal Beetles, some Thick-legged Flower Beetles, and various different flies.

This is an Essex Skipper (Thymelicus lineola); as AJC said in response to my blip last Saturday, the ends of the antennae look as though they’ve been dipped in ink. It was resting so peacefully on the shady side of this seed head that I had time to take literally dozens of photos, trying to get the perfect combination of focus and composition. This is not that image, but it’s the one I’ve chosen to show you because as well as the Skipper it contains that rather extraordinary fly – which arrived quite suddenly, stayed for half a dozen photos and then left again. I’m indebted to mollyblobs – or rather, to Mr mollyblobs – for identifying it as Urophora stylata, a picture-winged fruit fly with a particular fondness for thistles (with which the butterfly field is well stocked).

I found more thistles bursting into flower on one of the verges on my way back home – and gorging on one of them the first Megachile leafcutter bee I’ve seen this year. She was moving too fast, and the lane was too dark by then, for me to get a good photo; but if I remember to go out early when the sun is on that verge, tomorrow may well be Thistle Friday.