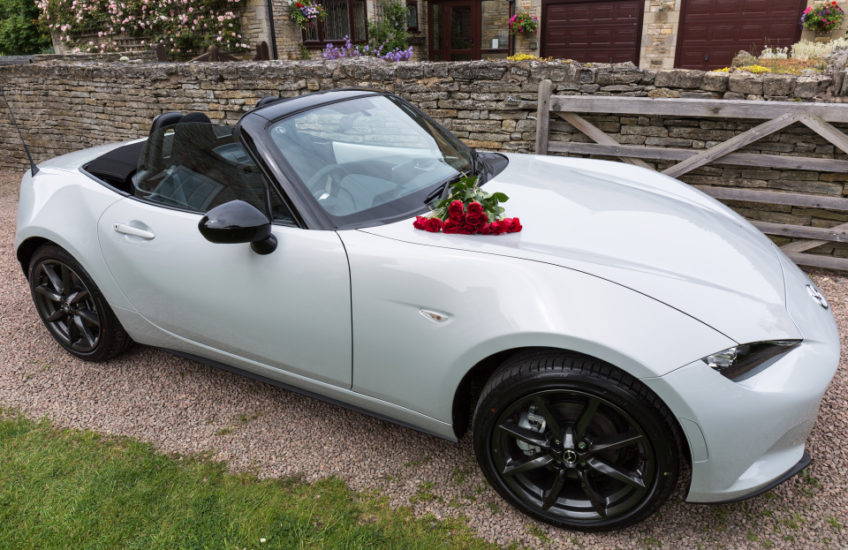 Flower Friday with a DIY twist: I did the roof all by myself!

My collection appointment in Coventry was at 10.30am, and it was 1pm when the MX-5 and I finally made it back into Stratford-upon-Avon, where I fell on a piece of cake as though I hadn’t seen food in a month. It wasn’t the salesman’s fault: the car has computers and such, which obviously need to be demonstrated even to the tech-savvy, but the real time-waster was the apparently endless stream of pieces of paper which have to be dealt with. In the end I was so bored I was Facebooking on my phone and simply signing any document that was put under my nose, so I’ve probably sold the house without noticing.

I don’t remember ever being nervous before when I’ve driven away in a new car – but I certainly was today. By the time I made it round the horror story which is the Ryton roundabout my nerves were in shreds, and I set off down the A46 at about 38mph. But I got used to it pretty quickly – though you’re so low to the road that you feel as though you’re going faster than you actually are, so I wasn’t really in danger of racking up a speeding ticket.

I was pootling back from Stratford, idly thinking that I needed to invest in either a hat or an industrial quantity of hair conditioner, when I came up behind a labouring crop sprayer. One of the few pleasures of driving a diesel Golf for the past few years has been getting the absolutely best fuel economy figures out of it that I could – but as my foot went down to overtake and the engine roared into life I mentally ripped up that particular obsession, threw the pieces over my shoulder and watched in the rear-view mirror as they danced in my slipstream.

I should tell you that R offered to drape himself over the bonnet in swimwear for this shot, but withdrew the offer when I said he’d have to hold one of these roses in his teeth.

Many thanks (I think) to Greg Lovett for suggesting the title of this blip, and to BikerBear for Flower Friday.

Off out for dinner now. Poop, poop!