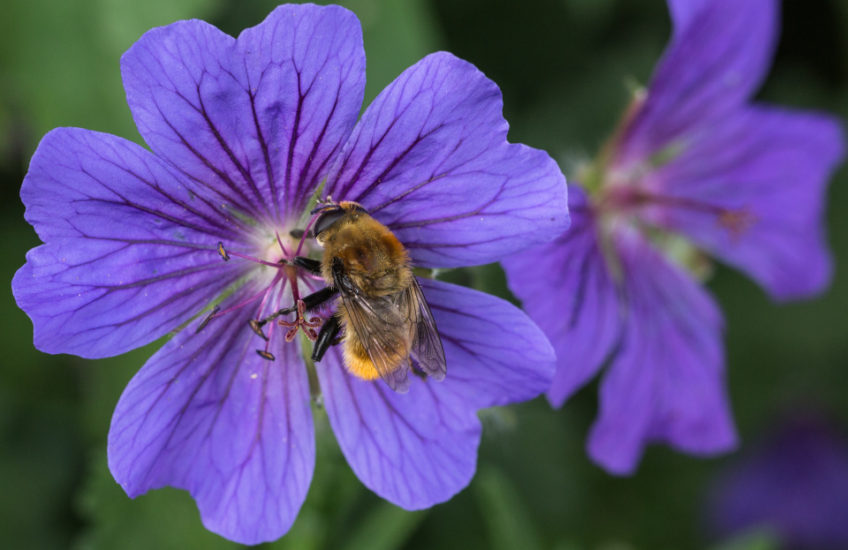 I first spotted him yesterday; he was fast and I couldn’t get focus on him (and I didn’t have my glasses on), and therefore I think it’s forgivable that my first thought was Common Carder bee. But there was something about the way he moved that didn’t seem quite right for a bumblebee, and I was fairly sure he was actually a hoverfly. Eventually I got enough shots to be able to confirm his identity as Merodon equestris, commonly called the Narcissus bulb fly because the larvae are known to develop in bulbs, especially of daffodils. In fact these hoverflies are thought to have most probably been imported to Britain from Europe (where many more species are known) in flower bulbs. Merodon equestris is found in several distinct colourways, mimicking different kinds of bumblebee; this, I would say, is the form known as narcissi, but several of the others are illustrated here.

When I did today’s bug walk around the garden I was keeping an eye out for him, and I picked him up quite easily by his buzzing note, which is higher-pitched than that of any of the four species of bee which were working my rose bed this afternoon. He also has a marked preference for my pink geraniums, even though I managed to photograph him on the blue here, and as I only have a few pink geranium plants I easily found him again each time he managed to get away from me. He’s not keen on being photographed (another distinguishing feature from bees, which very rarely show any interest in or apprehension towards humans), but he’s not otherwise timid: I saw him bounce against several bumblebees, sometimes managing to dislodge them from flowers that he wanted to feed from himself.

I have one last piece of information for you about M. equestris, which is that despite his thunder thighs he is extremely flexible – in evidence of which I offer you an extra photo of him cleaning pollen from his fur. I bet you wish you could do that, don’t you…? 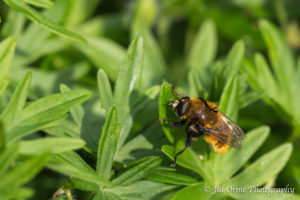