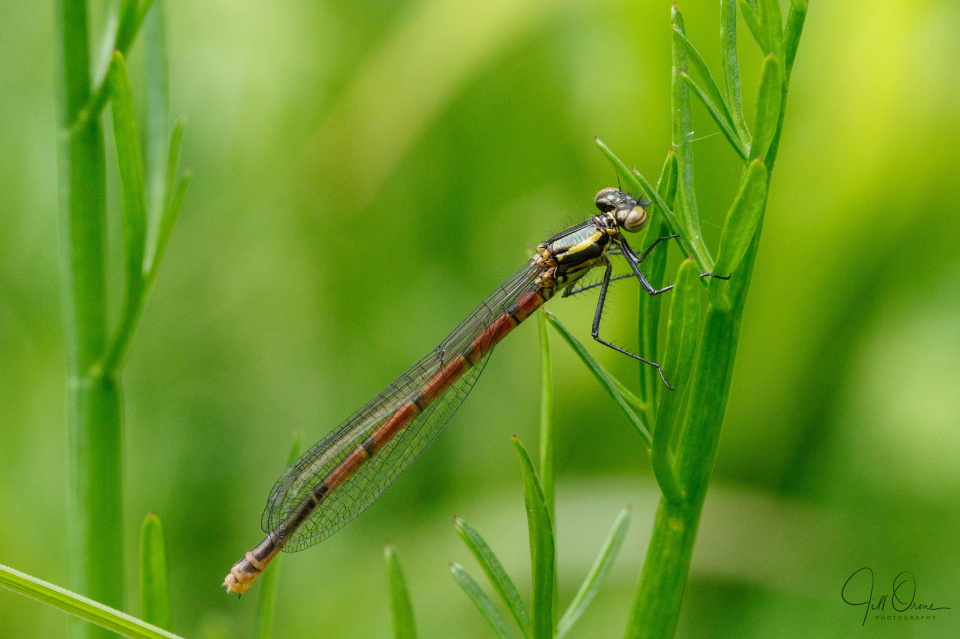 When I went to check the wildlife pond after breakfast – at which time the weather was gloomy and it was still quite cold – all three of yesterday’s damselflies were still on the pond sedge, and there was another female Large Red emerging. There wasn’t much light (and I didn’t want to use flash), and she’d chosen a stem that was out of comfortable macro distance from the pond edge, but I did my best to get a sequence showing the emergence, lying on a board R laid over the wet grass, and shooting with the long lens. This produced more misses than hits, to be honest, but I’m still working on the small number of keepers, and if I do eventually decide that they’re worth showing, I’ll post them to my Facebook page.

At lunch time I went back down the garden to check on the state of play, and discovered that only the two female Large Reds were still present, and they’d both changed stems in my absence, so were presumably warmed up and ready to leave. This is the same female as I blipped yesterday, with her colours much better-developed, shortly before she took off and flew up into the trees. A little while later this morning’s emerger also left. 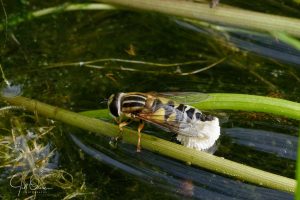 Today’s extra is a photo of something I’d never seen before: a female Helophilus trivittatus laying a clutch of eggs on the surface of the wildlife pond. This is the largest of the Helophilus hoverflies, and though it’s a widespread species it’s not especially common. Its larvae develop in water or boggy material, and have a breathing tube running from the end of the abdomen, which protrudes above the surface like a snorkel and allows them to breathe air while they’re submerged. Because of their strange appearance they’re commonly called “rat-tailed maggots”; I tend to think of them as Odonata food.