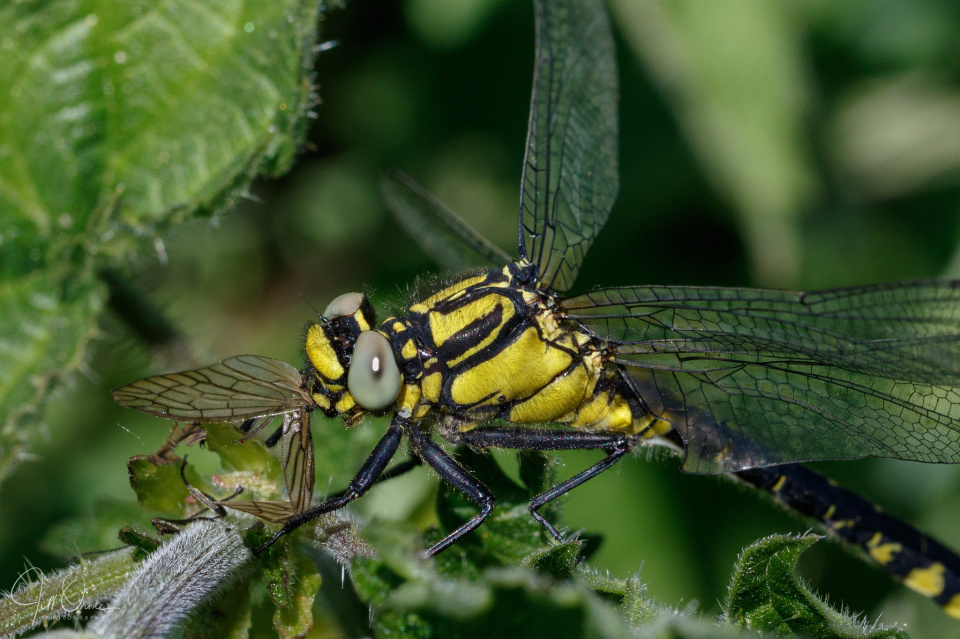 I went back to Ripple today, in search of more Common Clubtails, but it was nearly noon by the time I arrived, and with the sun shining strongly on the bankside vegetation the morning’s emergers had had plenty of time to dry out, warm up, and take off into the trees. It was also breezy, and with the vegetation blowing back and forth in the strong light, spotting anything that was prepared to sit tight while you walked past was something of a challenge.

Luckily I bumped into an expert, and he kindly searched out the first couple of Clubtails of my day. He also pointed out a Beautiful Demoiselle that I hadn’t spotted – largely because I hadn’t expected to see any at this site, so hadn’t been looking for them – and after this I found a few of my own, bringing my Odonata tally for the year so far to twelve species.

On my way back along the bank towards the car park I was hailed by a couple of chaps who’d just found this male Clubtail on a clump of nettles I’d searched without success an hour earlier. I don’t know what he was eating – the strongly-marked wing venation put me in mind of an alder fly, though the wings seem to be the wrong shape for that – but whatever it was he was having some difficulty with it. Dragons are naturally adept at removing and spitting out the unpalatable bits of their prey, but in this instance the wings were resisting removal, and he was chewing furiously and with great concentration, and completely ignoring the three humans standing just in front of him with cameras.

I came home with over three hundred photos, a mild case of sunburn, and the huge satisfaction of knowing that the season is finally getting into its stride.