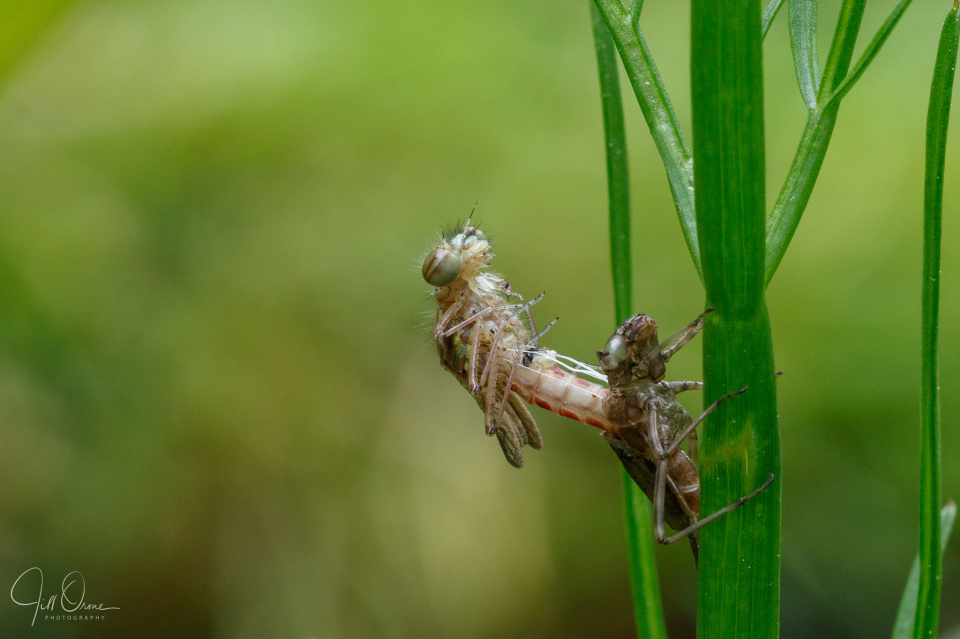 R chugged into my study this morning while I was still wondering what to do with my day, and told me that he’d just spotted a damselfly nymph climbing one of the pond plants, and if I got a shift on I might be able to photograph the whole emergence.

I got a shift on, and so did he, ferrying gear down the garden for me so that I could keep watch over the nymph, but even so I missed the moment when it burst, Hulk-like, out of its larval case. I was probably faffing with the tripod at the time – necessary because it was still early (and overcast), so the light was poor, but quite tricky to deal with, as I had to drop it very low and span the pond with it in order to get the camera level with the nymph.

All of my books describe emergence in similar terms: the fully metamorphosed damselfly pumps fluid into its thorax to expand it, splitting the larval cuticle inside which it has been contained, which allows it to push out its head, thorax and limbs. None of them explain exactly how it’s doing the pushing, but I assume this is achieved by continued expansion of the body – the legs are useless at this point because they’re very soft. Watching this process, I was mystified as to how the damsel was being supported, and according to Brooks & Cham it’s only the quite small portion of the abdomen that’s still enclosed in the larval cuticle that’s holding it up at this stage, and preventing it from falling into the water.

Having reached this point the emergence pauses, in what’s termed the rest phase, and doesn’t start again until the legs have hardened enough to be able to grasp the emergence support, and hold the damselfly as it pulls its abdomen free of the larval case. As soon as it was free of its exuvia this damsel – a male Large Red – began to play hide and seek with me around the water dropwort stem, and I had to abandon the tripod and shoot hand-held to record the expansion of first the wings and then the abdomen.

There are so many potential pitfalls with Odonata emergence, from poor choice of support, through damage to the fragile wings by surrounding foliage or bad weather, to predation by birds, amphibians or other insects, that it’s a wonder it ever succeeds. This one went well though, and about two hours after he first split his larval case the damselfly was fully expanded, and was resting and waiting for his wings and cuticle to harden enough for him to be able to fly. I assumed that this would take a while, so I went off to do other things, but it was a hot day, and when I came back a couple of hours later he’d dried out and flown.

Later in the afternoon I went for a walk at Grove Hill, where I found both male and female Broad-bodied Chasers – species number thirteen of my Odonata season.