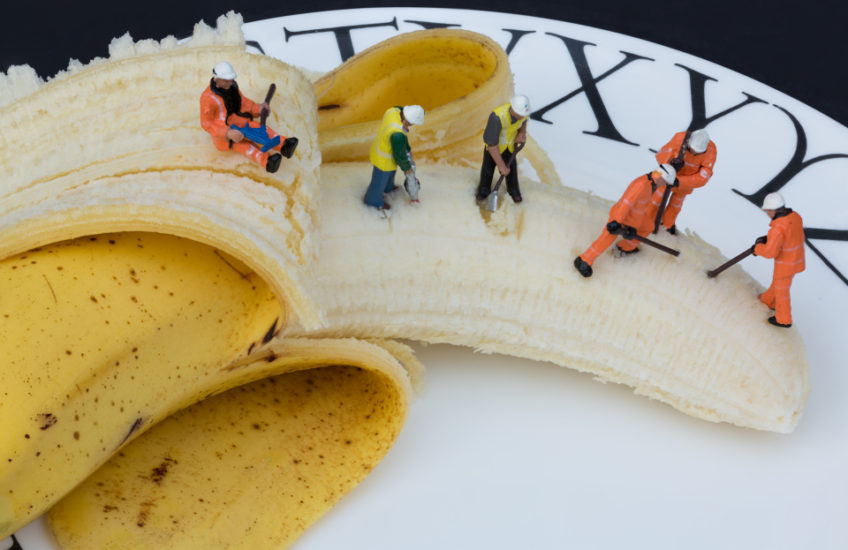 It was raining so hard that the Bachmen didn’t dare go out for fear of being washed away, and they were bored and spoiling for mischief. They decided to see what happened if they drilled into a banana – fully confident that The Slattern wouldn’t miss it, given that her idea of Five Portions a Day was one piece of carrot cake, one bar of chocolate and three glasses of red wine.

It absolutely heaved down for most of the day, and in the end I decided that I would have to fall back on the Bachmen – which I don’t recommend actually, as some of the bits are quite sharp. And then, just as I finished focus stacking the seven shots I took here, I glanced out of the window to see brilliant sunshine. I squelched outside with the camera and discovered that the garden was literally humming with bees and flies.

We have a largish Cotoneaster salicifolius which is currently flowering, and which I realised yesterday was a hoverfly-magnet. Today it was so thronged with bugs that I hardly knew where to point the camera first, and in very short order I came back into the house with nearly 150 shots. Processing them has been slow because I’ve had to identify several species of bee and hoverfly that I’d never seen before, and because I had to go out to choir this evening – so with time getting on I’ve decided to blip the banana mining, and finish working on my bug shots tomorrow. If there’s anything unmissable among them I’ll add it to my Bugs of the Day album for June, and post a link to it.