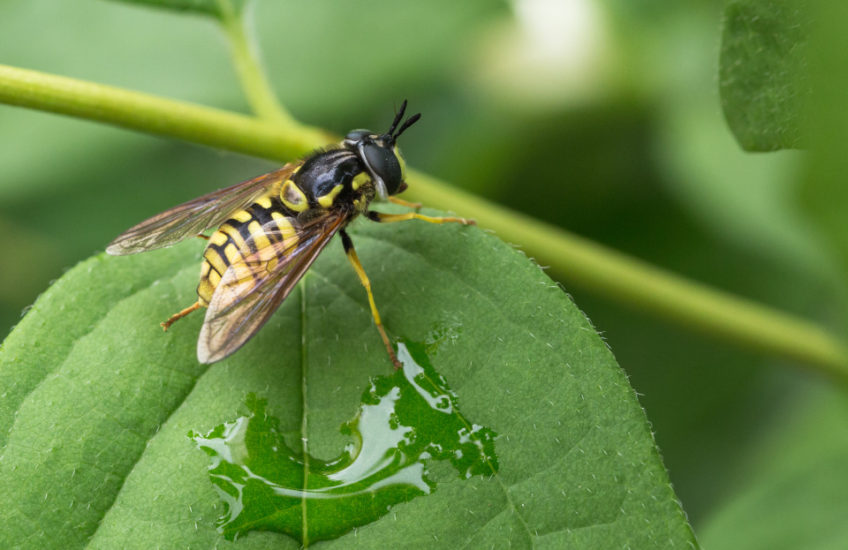 Her name is Chrysotoxum cautum, and she’s a hoverfly – but if your first reaction was “Bleurgh – wasp!”, don’t feel bad: that’s what she wants you to think. It’s what I thought too, when I first startled her and she flew quickly up off the Cotoneaster towards my face; I actually took a quick step back. But having watched her land again I could see even without my glasses that she’s much broader in the beam than a wasp. I’ve put in an extra to show how chunky she is. 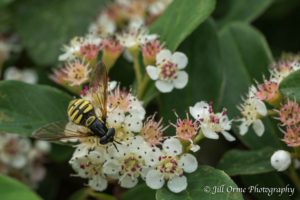 These are reasonably common hoverflies in the South-east of England, but Worcestershire is getting towards the northern end of their range, so I was pleased to spot her – not that she took all that much spotting with that colouring. In fact, if I’m honest, finding bees and hoverflies to photograph in my garden at the moment is akin to shooting fish in a barrel – this Cotoneaster salicifolius is absolutely covered with them (except when it’s raining, which it has been for most of the week, when they all disappear under the cover of its arched, densely-leaved canopy and wait for the next dry spell), and if I run out of subjects there, a few steps brings me to a bed which is carpeted in the blue and pink geraniums which are adored by bees and their mimics. I’m trying to balance taking advantage of this and recording all the species I can, with not giving myself such a massive amount of processing to do that I start to fall behind with it – I’m afraid that if I let a backlog begin to build up, I may never get myself straight again.

Before I go I just want to mention the absolutely appalling thing that happened in the little Yorkshire town of Birstall this afternoon: the local MP, Jo Cox, was shot and then stabbed by a man who accosted her on the street as she left a meeting with some of her constituents. Obviously it’s too early for all the evidence to be known, but it seems from eyewitness statements that the murderer was following a Britain First agenda, against a woman whose entire adult life had been dedicated to helping the disadvantaged, whatever their nationality, creed or colour. I’m more distressed about this than I can easily articulate, and angrier than I really want to express, given the dignified statement of her husband in which he asked people to unite against the hatred that killed her. She was one of the good guys, and it seems to me that we don’t have enough of those that we can comfortably lose one who still had so much to give. There’s more on this here.