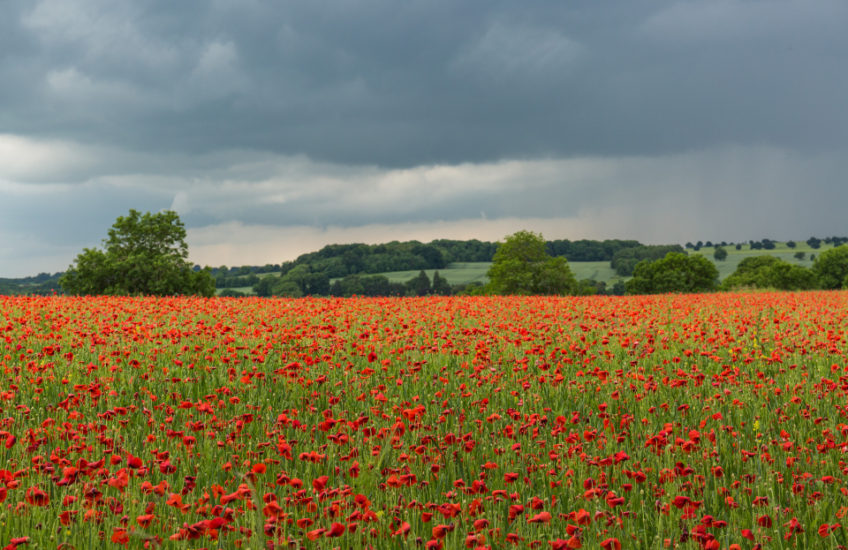 This morning R discovered that he had a sudden, urgent need to go to Surrey to buy a guitar. If you’re raising an eyebrow at the word “need”, you’ve obviously never been tutored in the equation by which guitarists calculate how many guitars they need:

The number of guitars needed by a guitarist = n+1, where n is the number currently owned.

Not that that’s any skin off my nose – R and I have a perfectly amicable arrangement around our joint and several passions, which means that I don’t query the purchase of guitars and he takes an objective and dispassionate interest in the arrival of new camera gear. My only stipulation has been that no more guitars are to take up residence in my study than already live there, so it’s probably fortunate that the Offspring have moved out, leaving two empty bedrooms.

So anyway, R needed to drive to Farnham, a place I didn’t think I’d ever been to, and I was pretty stir-crazy after being largely confined at home by the weather we’ve been suffering all week, so I decided to go with him. His satnav chose a route which took us down past Stow-in-the-Wold, and just outside the town we saw this wheat field full of poppies; by the time we’d both said “Wow! Look at that!” we were past it, but I made a mental note to try to make sure we came back the same way.

As we got near to Farnham I realised that in fact I had been there before – a few years ago I drove Child One down for an interview for the animation degree course there, but that had been a horrible, rainy day, and I’d spent my waiting time while she was interviewing the faculty sitting in a dingy coffee shop in an arcade in the middle of town. Today was much nicer, so while R was interviewing guitars I went for a walk and found the castle. It was quite interesting, and I did take some photos – but to be honest (and I speak as an English Heritage member) if you’ve seen one EH ruin you’ve pretty much seen them all, so I won’t bore you with them.

Just as I was getting a little grumpy about the fact that the least ruined and most photogenic bit of the castle was closed for a wedding, R called to say that he’d made his purchase and was ready to set off back. We had to duck and weave to avoid various horrible bits of Friday traffic, but eventually made it to Burford and thence onto the Stow road. At which point some distinctly Biblical weather swept across the Cotswold escarpment, and with the car headlights on and the wipers going full-tilt I could see my poppy photos going up in smoke.

But we were lucky. The weather was patchy and moving quite fast, and by the time we got to the poppy field it was fine – though the sky was threatening another deluge, as you can see. R gamely pulled into the next field gateway (where he had to execute – he says – a 27-point turn to be able to get back out again) and I walked back along the verge and got my shots. After all the fuss he made I thought I’d better ask his advice about which of them to post, and luckily he chose the one I’d already picked, which is this one. As he got up from my desk we had the following exchange:

J: “Thangyow.”
R: “Yowelcom. Shall we stop talking like Arthur Askey now?”
J: “I wonder how many people are left on the planet who even know who Arthur Askey was?:
R: “Or had dinner with him…”
J: “Whaaaaa……???? You had dinner with Arthur Askey???”
R: “Oh. Have I never told you about that? What a lovely man! And funny….”

I’d best not tell you what I said at that point: it wasn’t polite. I can’t abide name droppers. I probably don’t need to point out that I married up…

Mentioning Child One, as I did earlier, has reminded me that the music video she made for Oliver Wilde was released today, and I was charmed to find myself in the credits, twice! There’s a photo credit for having taken some of the stills, and a special thanks, which she tells me is for lens-lending and protection: I insisted on accompanying her, as a kind of arthritic middle-aged minder, whenever she went into woodland to get footage. I don’t know, and she didn’t ask, what I imagined I’d do if Something Bad happened; my primary defensive skill is sarcasm, but I did wear my big boots, so I suppose I could have stamped my foot and got very cross if necessary.