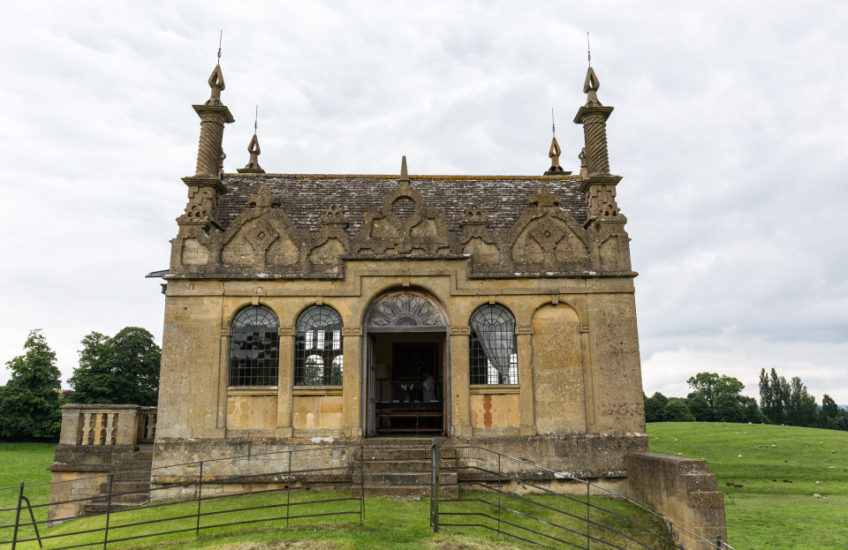 If you’ve followed my meanderings for any period of time you’ll know that this is one of the Banqueting Houses at Chipping Campden Manor, which have been a minor passion of mine for a number of years, but which I’ve never managed to get into before today because they’re generally let out. I have blipped them a couple of times before, but my previous shots were taken over a wall.

This morning I happened to be in Campden for a laydees’ rehearsal for the upcoming Campden Festival Chorus concert, and as I left the church I was pulled up short by the sight of people walking through the Manor gate, and an A-board advertising the fact that this is a Landmark Trust open weekend. And me with no camera! Luckily the MX-5 can do Campden to home in 12 minutes, so I was back within the half-hour. I was absolutely enchanted by the place, and could hardly tear myself away; if we’re Facebook friends you’ve probably already seen the album of photos I posted this evening; but if not, you can access it here if you’d like to see more.

This is the East Banqueting House, which, improbably, sleeps six people – though actually that’s not strictly true. The building is three storeys deep; from this side of it you can only see the top floor, which is a large sitting room – the lower storeys, which contain a kitchen, bathroom and two bedrooms, can be seen in a photo taken from the opposite aspect on the Landmark Trust page for this let. But the remaining two beds are in one of the pepperpot gate houses of the site, which are probably 200 yards away – ideal, I’d have thought, for those tricky relatives you can’t leave out of the holiday but don’t want to have to hear bickering the night away.

The West Banqueting House is even smaller; it sleeps two people in the main building, where there is also a kitchen, bathroom and sitting room, and another two in a minute building a few yards away which is known as the Almonry. A staff member I chatted to told me that quite frequently both Houses are let together, to extended families.

She also told me very proudly about the work of the Landmark Trust, which was founded in 1965 by Sir John Smith and his wife Christian. Sir John was on the Board of the National Trust, but he became increasingly concerned about buildings which, though they were of historic value, were too small and economically insignificant to be taken on by the NT, and which at the time were tending to fall into ruin and ultimately being demolished. He and his wife used their own money to found a charity with the aim of saving such buildings, and his vision was that rather than them being run on the same model as stately homes they should be made available for people to rent, so that the public could spend time staying in historic settings.

The idea took off, and now the Landmark Trust has 200 properties, ranging from castles to terraced houses – including some in other countries. It has recently been involved in the restoration of the Chateau of Hougoumont, one of the most iconic sites on the battlefield at Waterloo; and since I got back from Campden at lunch time I’ve been trying to interest R in the concept of staying in a fisherman’s cottage by a Benedictine Abbey near Portofino in Italy.

I’m not generally of a fey disposition, but I sometimes have a strong emotional reaction in places where I feel as though I’m almost touching history – and I experienced that today. The grand Jacobean manor house of which these buildings were essentially decorative flourishes is long gone, burned to the ground during the English Civil War, and the only trace of the formal garden that lay between them is a small and ruinous piece of wall, fenced off for safety; but somehow when you stand on the grassy path that runs from one to the other you get a sense of how awe-inspiring the place must have been.

I met the LT’s historian and Head of Engagement – a local woman, who went to Chipping Campden High School at a time when the land was unused and the buildings derelict – and she told me that she tries to include the Banqueting Houses in the LT open day programme every couple of years because she knows that they’re extremely important to the people of Campden. I can well believe that, and I think it’s a mark of the organisation that the people running it love the buildings they rescue, and understand that people who might not necessarily be able to afford to stay in them love them too.

As you may have spotted, I think the Landmark Trust is a Good Thing, and I recommend that you check it out.